The scandal at Activision Blizzard continues to take its toll. As Kotaku has learned, the publisher has fired three experienced developers working at Blizzard Entertainment. Luis Barriga, i.e. the director of Diablo IV.

Also dismissed were Jesse McCree, the game's lead level designer, and Jonathan LeCraft, who was a senior designer for World of Warcraft. Activision Blizzard assures that there are many talented developers in Blizzard Entertainment who will easily take over the duties of these three, so it will not negatively affect the work on both games. 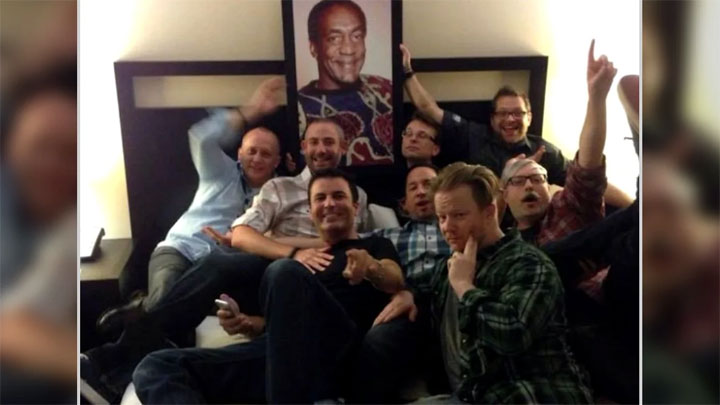 Blizzard employees took photos of themselves with a portrait of Bill Cosby during BlizzCon 2013. Source: Kotaku.

The publisher didn't give a reason for the layoffs, but it almost certainly involves the recent high-profile sexual harassment and mobbing scandal. Both problems were said to be so prevalent at the company that the California Department of Fair Employment and Housing filed a lawsuit against Activision Blizzard after a two-year investigation.

Jesse McCree and Jonathan LeCraft were in the now-infamous photo taken inside the so-called Bill Cosby Suite, which is Alex Afrasiabi's (who is mentioned by name in the aforementioned lawsuit) hotel room from back in the days of BlizzCon 2013. The place featured a ton of alcohol and a photo of the comedian, who was already publicly accused of rape at that point. The developers explain that the name came from a joke making fun of the nasty carpet, but many people are not convinced by this explanation.

It is worth noting that the aforementioned photo also includes another developer from the team dealing with World of Warcraft - Cory Stockton. He has not been fired as of yet, but the publisher sent him on forced leave last week.

Rumor: Call of Duty: Vanguard to be Announced Next Week

There's Hope for New Anti-cheat in Warzone, but Player Reception is Mixed

Hideo Kojima Adds Fuel to Abandoned Theories; It May be Silent Hill After All

Naraka: Bladepoint Launches on PC - Thousands of Players on Servers