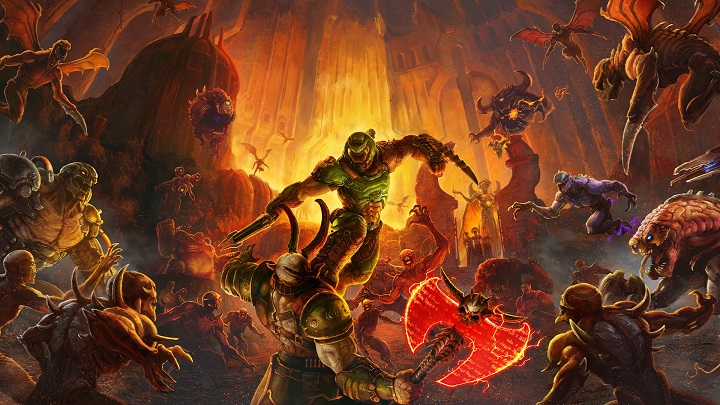 Battle mode will enable the players to play as demons and hunt the Doom Slayer.

During Quakecon 2019, id Software presented some new information about multiplayer Battle mode in the upcoming Doom Eternal. We already know that the battles will be held in the form of 2v1 fights - one of the players will play as Doom Slayer and the other two will play hostile demons. At the beginning, the mode will have six maps, each of which will be created to provide a dynamic and entertaining fight. It will last three rounds and after each round, the players will be given the opportunity to upgrade their demon or Doom Slayer.

As far as the title Doom Slayer is concerned, from the very beginning, he will have access to all improvements and weapons. In addition, new skills will allow him to dynamically move around the map in order to beat demons more efficiently. As in the campaign, Slayer will need to use his resources wisely - Glory Kill will bring back part of his life, setting demons on fire will provide additional armor, and chain-saw kill will provide ammunition. Doom Slayer's task is to kill both opponents, but it's worth knowing that after the elimination of one of them we have a certain amount of time to finish off the other, otherwise the first one will be reborn.

We've also learned about the types of demons that Doom Slayer will fight. At the start of the game there will be five types of these, each of which will offer different skills. To defeat an opponent, players who take on the role of hell beasts will be forced to work together and use their skills properly. So far, we only know the abilities of three of them:

The skills of the other two demons - Marauder and Archvile - have not yet been revealed, but both characters will be available at the start. In addition to individual abilities, each of the hellspawn will be able to summon additional units controlled by AI. In addition, demons will be able to block Doom Slayer's ability to collect items for a short period of time, which when used at the right time can tip the balance of victory in their favor.

We also know that even after the release of the game new maps and demons will be released completely free of charge. To see if the mulitplayer mode in Doom Eternal actually turns out to be as entertaining as the devs say, we'll have to wait until November 22, this year. The title will then be released on PC, PlayStation 4, Xbox One and Nintendo Switch.