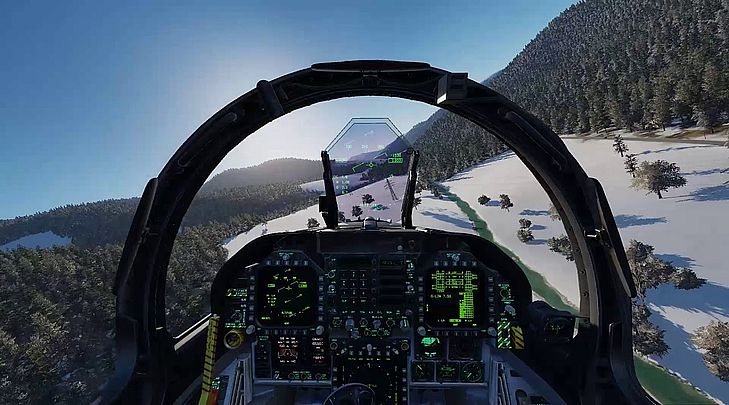 Imagine that every button is responsible for something.

If you are a fan of speed and beautiful landscapes visible from the cockpit of a plane, you will be in for a real treat. The free Digital Combat Simulator World platform, which is only available on PC, will soon be equipped with a new aircraft model. And not just any aircraft - the F-16C Viper. It is due to launch on September 25, this year, but you can now buy it in a pre-order on the official DCS website or via Steam. However, you have to take into account the expense of $63,99.

DCS World looks impressive, as usual. The new trailer, whose main star is the F-16C Viper, presents a superbly reproduced aircraft interior, several explosions and spectacular barrel rolls in the skies. As a console player, I feel a gentle sting of jealousy, watching the devs show off the power of PC. Watching the trailer you can get the impression that these are real frames from some film (maybe before the post-production, but still), anyway see it below.

The F-16C is a single-seat and single-engine fighter designed in the 1970s. The aircraft is used mainly in close air support mission, reconnaissance, and suppression of anti-aircraft defense. The machine is also equipped with Litening targeting system and HARM missiles. In the game, you will see every element of the plane reproduced in the smallest details. We will not only see but also hear them because as befits a real simulation, the devs also took care to implement authentic F-16C sounds.

Digital Combat Simulator World saw the light of day in 2012 as a platform bringing together all the products of Eagle Dynamics studio (and several companies that decided to create games on the same engine). Despite the fact that it's free, if you really want to "spread your wings", you have to invest a lot in it. The basic version offers only two aircraft models and one map. And the modules, as you can see, aren't really cheap. Anyway, for fans of aviation, it's a mandatory position.