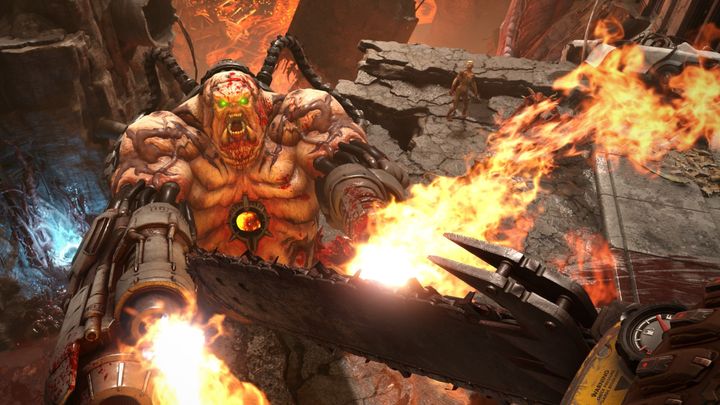 Work on the implementation of ray tracing in Doom Eternal is just beginning.

The upcoming first-person shooter Doom Eternal is to be another title that will use the ray tracing technology (currently available only on PCs equipped with selected Nvidia graphics cards). However, it cannot be ruled out that support for this feature will have to wait - developers are just beginning to look at specific solutions. This information appeared in an interview that the executive producer of the title, Marty Stratton, gave to Digital Foundry.

"We didn't really talk about it at all. And, frankly, we didn't spend too much time on it. A year ago the team worked on initial implementation and ideas. But there were many other things we had to do first.

Our tech team is made up of the biggest fans of new technologies, so it was hard to pull everybody off, because it was their new, shiny toy. But when we are talking about getting the game out there as close to on time as possible and at the highest polish quality, we had to pull back on that effort," described Marty Stratton.

It's worth noting that Doom Eternal has almost two months left until the launch (the game will be released on March 20), so it's possible that the developers will be able to implement ray tracing during this time. However, it seems likely that support for the technology will be added later, in the form of updates - as was the case, for example, with Wolfenstein: Youngblood.

Marty Stratton also noted that the team has some interesting ideas for using ray tracing. In his opinion, it allows for more than just improving the quality of reflections, shadows or lighting generated in real time. What exactly is this about? Marty Stratton didn't reveal anything, but it is possible that id Software is preparing something interesting.

"This is something that they (the team responsible for the engine - editorial note) are just about ready to starting look at again. And actually, they have some interesting ideas. I don't want to go too far that path, because who knows exactly what we'll do. But there is more than you an use this technology for than just reflections, shadows and real-time lighting," added the developer.

It's worth recalling that Doom Eternal is coming to PC, PlayStation 4, Xbox One and Nintendo Switch. Unfortunately, we will have to wait longer for a release dedicated to the last platform - for now we only know that it will hit the market this year.