Dying Light 2 is supposed to be a grandiose game in many ways, this has been known for a while now. This also applies to the question of the script. As Techland recently boasted on Twitter, there are 350,000 words in its latest work, the same number as in the novel Anna Karenina by Leo Tolstoy and slightly more than in The Lord of the Rings: The Fellowship of the Ring and The Lord of the Rings: The Two Towers combined (343,988 words). As for dialogue lines, on the other hand, there will be 40,000 of them. 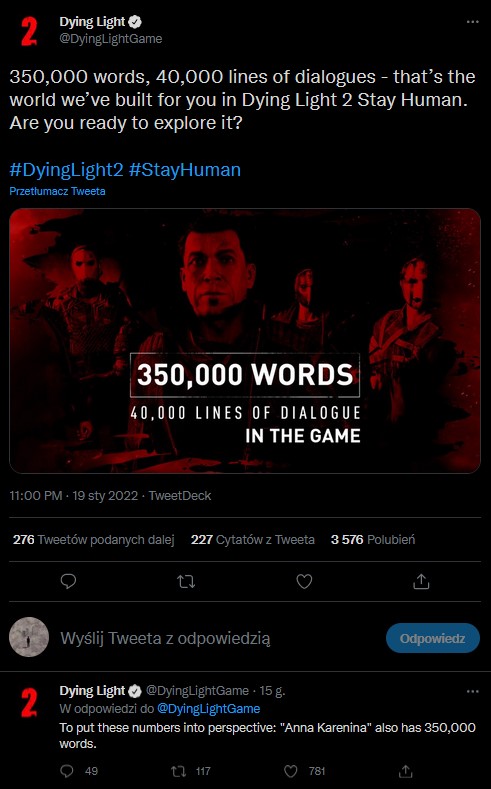 How do these numbers compare to other video games? Let's take The Witcher 3, for example, the base game without DLCs. According to our editorial calculations, there are about 50,000 dialogue lines in CD Projekt RED's game, which is only 10,000 more than in Dying Light 2. In turn, this transalates into exactly 560,692 words the latter, of which around 364 thousand may come from dialogues.

Will all these dialogues and words bosted by Techland translate into interesting content? We will be able to find out on February 4, when Dying Light 2 will debut on PC, PlayStation 4, PlayStation 5, Xbox One and Xbox Series X/S. The title is also coming to Nintendo Switch (in a cloud version). That edition, according to yesterday's announcement, will arrive within six months of the main release (via VGC).