The recent, somewhat controversial, first birthday of Genshin Impact was a bit of a disappointment to its fan community. It's possible that the celebration of the second anniversary of this free-to-play title will take place in a slightly more festive atmosphere. Who knows, maybe even Elon Musk - CEO of Tesla corporation and the richest man in the world - will take part in them. As unlikely as it may seem, the business tycoon has expressed interest in appearing in the game in one of the tweets.

These words can be seen as a response to a tweet that appeared on the official account of Genshin Impact on the aforementioned website (see screenshot below). Having reached 2 million followers, miHoYo decided to challenge the community and encouraged fans to follow their second account - @Paimon2theMoon (Paimon is an NPC from Genshin Impact) - which is allegedly run by someone named... Ella Musk. Since Elon Musk is the father to seven sons, someone at a Chinese studio apparently created a fictional daughter for him. 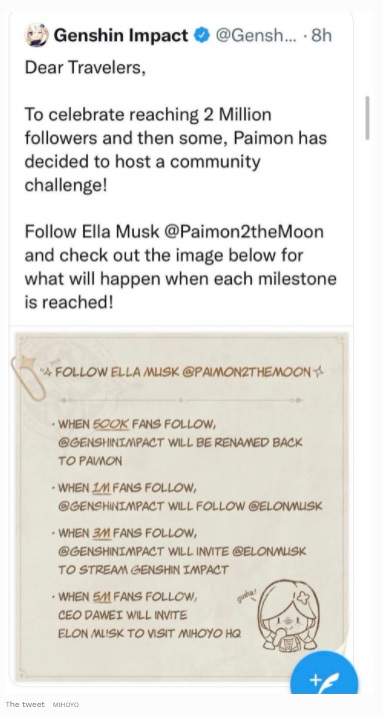 There are four thresholds: if enough people follow @Paimon2theMoon, four different promises will be fulfilled. At 500,000 followers, Genshin Impact's official Twitter account will be renamed. At 1 million, miHoYo will start following Elon Musk. At 1.5 million they will invite him to stream, and at 2 million - to the company HQ.

Interestingly, the tweet in question was deleted - were the developers afraid that the community would take the challenge too seriously and they would really have to fulfill the promises? Or maybe they were prompted to do so by the very cold reaction of the fans? Hard to say. In any case, Elon Musk's humorous response is unlikely to suggest that the developers will be forced to remove the entry, and as I write these words, @Paimon2theMoon's profile is followed by less than 70 thousand people. So it doesn't look like the milestones set by miHoYo will be reached anytime soon.

As for Genshin Impact, it received update 2.2 yesterday, which - at least on PC - weighs in at 11.8 GB. The patch introduces, among others, the island of Tsurumi, another four-star character (Thoma), as well as new monsters: Riftstalker Whelp and Hound. It's also worth mentioning that with the addition of fresh content, all fans are now able to obtain the character Aloy, known from Horizon: Zero Dawn, which until now was available only to users of PlayStation consoles. More information on patch 2.2 can be found here or in the video above.