A few days ago, already after the release of patch 1.40, Euro Truck Simulator 2 received another small patch on Steam. It was limited to introducing only one thing. Mysterious trucks covered with a red sheet appeared in front of Renault dealerships. Why were they there? Well, they are an announcement of an event that will take place on April 6, this year. On that day, Renault Trucks T and T-High models with refreshed look will appear in SCS Software's game. They will be available not as paid DLC, but as a free update. 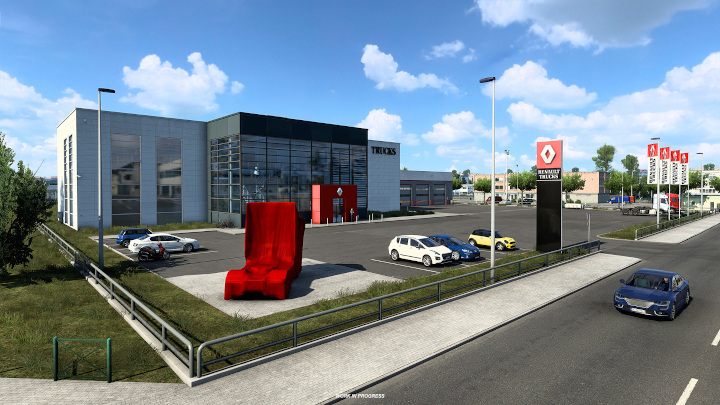 SCS Software and Renault are heating up the atmosphere ahead of the presentation of the refreshed trucks.

What's so special about the event? Well, the face-lifted Renault Trucks T and T-High models will also appear on real roads. However, before the truck's revised appearance is officially unveiled in physical form, it will be on show in Euro Truck Simulator 2 on April 6. This is the first time in the history of the automotive industry that a new truck model will be revealed exclusively through a video game.

"We are honoured and proud that thanks to our excellent relationship with Renault Trucks and their recognition of the importance of our #BestCommunityEver, this amazing milestone will actually be achieved!," reads the official statement.

To acknowledge the incredible commitment of their community, SCS Software is encouraging the gamers to play along. It consists in driving up to a Renault showroom in Euro Truck Simulator 2, taking a screenshot showing the truck covered with a red sheet, and then posting it on Twitter, Instagram or Facebook with the hashtag #RenaultTrucksEvolutionIsComing. Five randomly selected people who do so will receive attractive prizes from the Renault Trucks range.

The presentation of the new Renault Trucks T and T-High in Euro Truck Simulator 2 is not, however, what fans of the SCS Software's game are most looking forward to at the moment. The debut of the Iberia expansion, which will enable us to visit Spain and Portugal, is imminent. The exact date of the DLC's release is to be announced this week.

PUBG Lite Will be Shut Down

Brewmaster Coming to PC and Consoles