This past Friday saw the release of Evil Dead: The Game, a cooperative third-person action game based on the license of the iconic movie series directed by Sam Raimi. The creators atBossTeamGames have reasons to be happy. In just five days the title sold about 500 thousand copies on PC, PlayStation 4, PlayStation 5, Xbox One and Xbox Series X/S.

This information was provided by Matthew Karch, president of Embracer Group, owner of Saber Interactive - the game's publisher (via GamingBolt). During a meeting with investors dedicated to the fourth quarter of fiscal year 2022, he emphasized that his company has "very high" hopes connected with this title.

It is also worth noting that he revealed that Evil Dead: The Game is "the beginning of a new series for Saber". So it looks like there may be more games using this well-known brand in the near future. In the face of success, one can also hope for a longer support with new content.

It is also worth noting that more and more reviews of Evil Dead: The Game hit the web. On Metacritic the PC version of the game has an average rating of 77/100 (based on 7 reviews), and on PlayStation 5 74/100 (based on 10 texts). Critics praise, among other things, the satisfying difficulty level, bloody gameplay with well-woven story elements, and quite a bit of variety when it comes to game modes and classes. There are also plenty of nods for fans of Dead Evil which should definitely appeal to them.

However, the title also has its problems. Reviewers mention for example excessive repetitiveness of animation of the so-called finishers or a relatively small number of maps. They also complain that not all elements are as much fun as they should be. Besides, people who don't like co-op games don't really have anything to look for here. 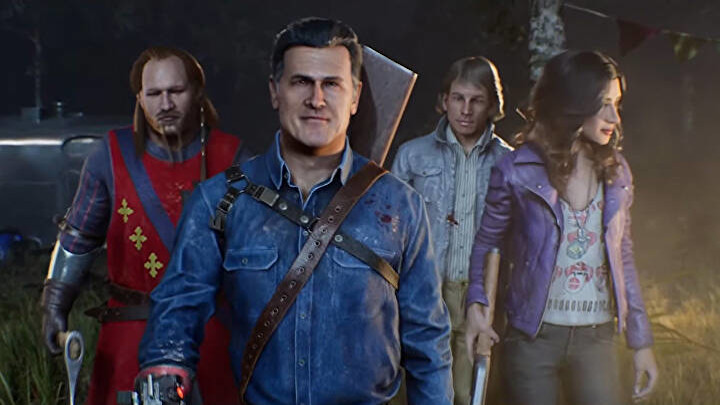 There's no shortage of characters familiar from the big screen in Evil Dead: The Game.

But who knows? Maybe with the next updates and additions the game will receive enough new content, that at least some of the flaws will fade away? We should find out about it over time.