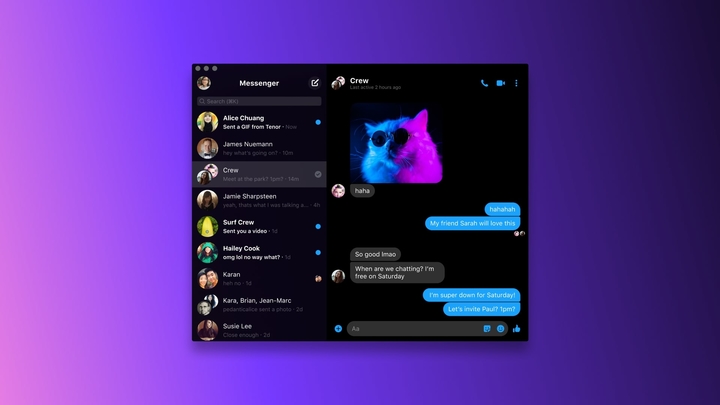 The introduction of Night Mode is a great step. After all, it has many followers.

Desktops and laptop users of the Messenger app have received an updated, which adds some useful features and refreshes the design of the app's interface. It is available on both PCs and Macs. Facebook argues that the new version of the instant messenger has been driven by an increasing number of audio and video calls. Last month alone, the company recorded over 100% more calls.

"Today were launching a Messenger app for MacOS and Windows so you can video chat on your computer and stay connected with friends and family all over the world. Now more than ever, people are using technology to stay in touch with the people they care about, even when physically apart," wrote Stan Chudnovsky, Vice-President of Messenger in an official announcement.

Messenger is a popular app that will be able to compete with programs such as Zoom and Microsoft Teams when the desktop version is updated to include video calls. Nowadays, when many companies have switched to remote work overnight, it is a great alternative.

How does the new Messenger work?

One video call can involve 8 people at a time. Only users who are on our facebook friends list and receive a special invitation can join the chat. As it is a communicator whose main purpose is the text chat, groups can use it and share, for example, the materials required for work. The application works with mobile devices so that people using smartphones will also have a chance to participate in the conversation. To sum up - everything we know from iOS or Android has been transferred to desktops. Including Dark Mode, GIFs and notifications (they can be muted).

Messenger is available for free on the Microsoft Store and Mac App Store. You'll need OS X 10.10.0 or later to operate Messenger on Macs, and you'll need Windows 10 version 10240.0 or later.

Sony in Turmoil? PS5 May Have Problems With Overheating