Yesterday we informed that Fallout 76 got a paid subscription, whose purchase provides various bonuses. One of the latter is a scrapbox, where we can hide any number of components for crafting. As befits Fallout 76, even when introducing a paid subscription to its most unsuccessful work, Bethesda Softworks did not avoid complications.

As reported by Forbes, other problems of Fallout 76 are related to private servers that are not entirely private. The players can see areas robbed of items and full of dead enemies, which makes it possible to say that we are seeing old instances being recycled. Another thing is that people with a large list of friends do not have any tools to block people from joining them on private servers.

Well, it turns out, that after placing resources in this box, they can... just disappear. This problem was faced by many players who describe it on Reddit. As one of them says, while on his own private server, he put his "scrap" in a scrapbox and then moved to a friend's private server to act as an intermediary in the trade of goods. After some time he noticed that he had no resources to modify the weapon, so without suspecting anything, he looked into the box to empty it. Then it turned out that it was completely empty . So he returned to his private server, but it didn't help much, and he had nothing left but to ask for help from the devs. After providing his profile details and proof of purchase of the game on the day of its release, he was waiting for further feedback from them at the time of writing this message. 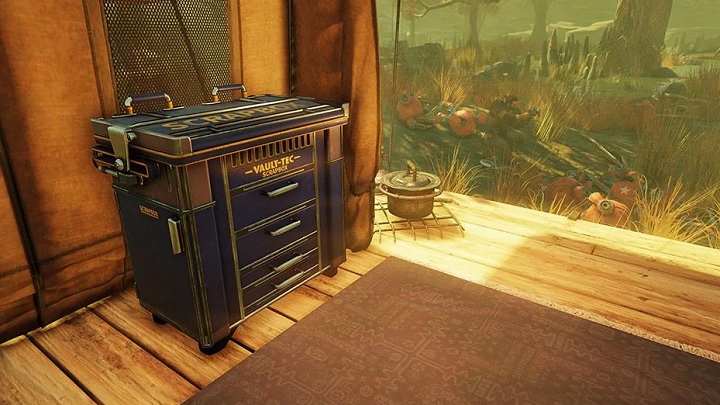 It was supposed to be like never before, and it came out like always. Bethesda Softworks now has another problem to solve.

Of course, you may wonder why anyone decides to pay for the Fallout 1st subscription at all. Well, the bonuses offered by Bethesda Softworks may prove to be useful; just increasing the amount of space for crafting parts is something that the players have been asking the developers for months (the person whose problem we have described in detail above, runs an auction house and fighting club, and also makes extra money as a courier or broker in various transactions, so that this update was "mandatory for its style of play"). Another matter is that the fact that the publisher demands money from the fans for all this makes many of them laugh bitterly or even get angry; you will read more about this in our previous message.

Finally, besides the scrapbox, Fallout 1st offers the possibility to create your own personal worlds, access to Atomic Store sales and a monthly bonus of 1650 Atoms, as well as a Survival Tent, Ranger Armor Outfit and Icons and Emote Pack. The price of all this? Just a measly $99.99 per year or $12.99 per month.