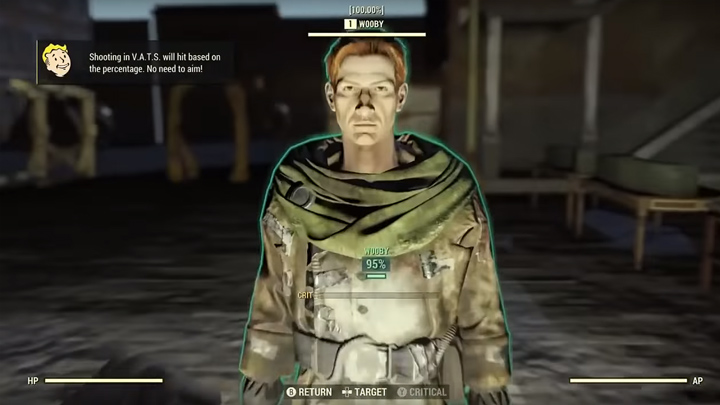 In the development room you can meet the only human NPC in the game. Wooby is most likely to be there to facilitate armament testing.
FALLOUT 76 IN A NUTSHELL:

Last year's launch of Fallout 76 turned out to be a real disaster for Bethesda's studio. The creators probably hoped that this year would be different, but unfortunately, another affair related to this title has just broken out. Players managed to find in the game world the so called developer's room, and authors ban everyone who has succeeded in getting there.

Development rooms are virtual lockers, providing creators with quick and unlimited access to all items. Such a solution is used by many teams, as it makes it much easier to test games and experiment with new ideas. Such spaces are usually removed with the games release or the creators block access to them. In the case of Fallout 76 Bethesda did nothing to cope with this. Several people have discovered a way to get to this place. There they found schemes to get all items, including paid items and skins available only in pre-orders, as well as objects that have not yet been officially added to the game. Moreover, in the room, the only human NPC in the form of a man named Wooby is located.

Finding a development room is, of course, a big problem for Bethesda, as it threatens to ruin the entire virtual economy of the game. Those who have received a ban for such action report that to regain the access to the game you have to explain game designers how youve managed to get there in the first place. If you play Fallout 76, we advise you not to try to reach this place. You can see how it looks like by watching the above video.

Lets recall that Fallout 76 made its debut on November 14th last year on the PC, Xbox One and PlayStation 4 versions. The game turned out to be a big disappointment and the PS4 version has an average rating of 53% according to Metacritic.

The game made its debut in a terrible technical condition, and additional excitement provided us with a scandal related to the poor quality of the bag in the $200 edition of the collector's Power Armor. Bethesda's negligence also led to the leakage of customer data. This year also promises to be hot, as there are many indications that lootboxes and paid sets of cards with perks will soon be added to Fallout 76.