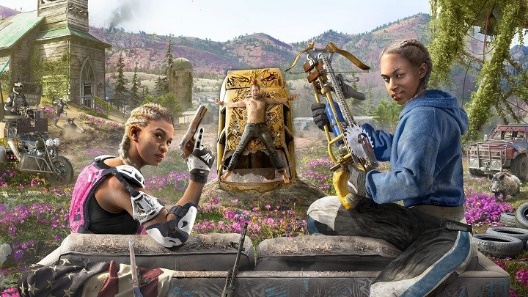 Mickey and Lou are waiting.

During this year's Game Awards, Ubisoft announced the next installment in the popular open-worls FPS series. Far Cry: New Dawn wont be taking the players to a completely new location, as was the case with the previous installments. Developers decided to create a direct continuation to the previous part, so in the new episode we will mainly visit places known from Far Cry 5.

A new visit to Montana, this time in its post-apocalyptic rendition, prompted one of the YouTube users to create a video comparing the locations of Far Cry 5 and Far Cry: New Dawn. Cycu1 (the name of the channel can probably be treated as a nickname, especially as the channel comes from Poland) prepared a series of comparisons, justaposing two fragments of the two games that took place in the same locations. The first one is a ride on a motorcycle and a quad to one of the bridges, while the second one is a walk around the church. You can see the whole footage below.

The peaceful, forest landscapes known from FC5 have been replaced by sandy wastelands, scarcely sprinkled with bright flowers. Signs and other roadside "attractions" are overgrown with vegetation. Just like the church, which in the previous version was in relatively good condition. In Far Cry: New Dawn it looks much more like a wildlife museum. We will see if this recycling will be good for Ubisoft, because we can assume that there will be no shortage of people willing to point out laziness to Ubisofts designers. The release of Far Cry: New Dawn is planned for February 15, 2019. The title will hit PC, Xbox One and PlayStation 4.