The team at Sports Interactive has reasons to be satisfied. Director Miles Jacobson boasted that games from the FM21 series (i.e .Football Manager 2021, Football Manager Touch 2021 and Football Manager Mobile 2021) have exceeded the one million activation mark faster than any other game family in the developer's history.

It is worth noting that all these titles, including mobile releases, are paid products. In practice, Jacobson reports that more than one million people have already purchased these games, as copies sent to stores have not been activated.

What's more, players have not only bought these games, but also play them intensively. Last week at least one of them was launched by over 900,000 people.

This success is also visible when we look at stats on Steam. On January 2, this year Football Manager 2021 set a new activity record with 92,461 people playing the title at the hottest point of the day. It's worth adding that even this impressive result doesn't fully reflect the game's popularity, as the PC version is also sold on Epic Games Store. 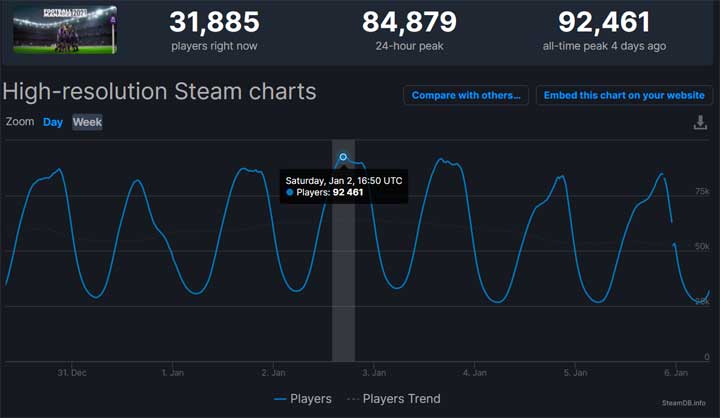 PC gamers clearly prefer the full-sized version of the brand. Simplified Football Manager Touch 2021 is much less popular. The latter game's activity record on Steam is only 1854 people at once and was established at the end of last year.

Early Access to Everspace 2 Coming This Month; Full Release in 2022

Sea of Thieves Climbs the Popularity Ranks on Steam

Early Access to Everspace 2 Coming This Month; Full Release in 2022