GPU shipments are up 35% compared to the first quarter of 2020. This is according to the analysis conducted by the analytical company Jon Peddie Research. From the report presented, we can conclude that the situation in the GPU market has improved dramatically. After all, in the first quarter of 2021 a total of 119 million copies of GPUs were sold (an increase of 38.74% year-on-year). Unfortunately, this does not affect the situation in stores, where the devices is either unavailable or sold at highly inflated prices. 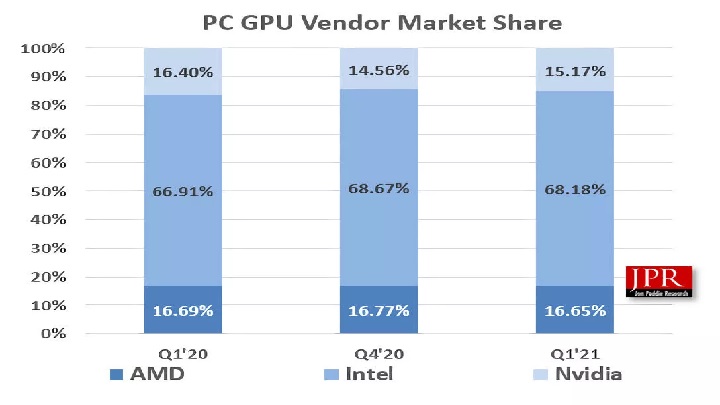 From the report prepared by Jon Peddie Research we also learned that both AMD and Nvidia saw a change in market share. During the first quarter of 2021, the latter showed an increase of 0.62% compared to the fourth quarter of 2020, while the share of the AMD dropped by 0.12% during the same period. So this is another decline in AMD's share of the GPU market. Perhaps the situation will change after increasing production or more noticeably at the time of the release of Radeon RX 7000 (that is, at the end of 2022), which are expected to be noticeably faster than the previous generation of chips.

Despite the increase in shipments in the PC graphics card market, it should be expected that their shortage will continue for the next years as well. Therefore, the appearance of new chips will always meet with great interest of users, and waiting in front of a store will become a more common sight. The situation in the coming months, unfortunately, is unlikely to improve, and increasingly we will see GPUs at twice the suggested price. JPR predicts that GPU sales will gradually increase and hit up to 3.33 million units by 2025. Thus, the market share of dedicated graphics cards could reach up to 26% by five years.