Although 2020 was a financially successful year for AMD, the company recorded a loss in the following statement. Compared to 2019, in which AMD's share on the dedicated GPU market was 27%, in 2020 that figure fell to 18% (via Jon Peddie Research). Similarly, Nvidia's share increased by 9 percentage points - from 73 to 82%. 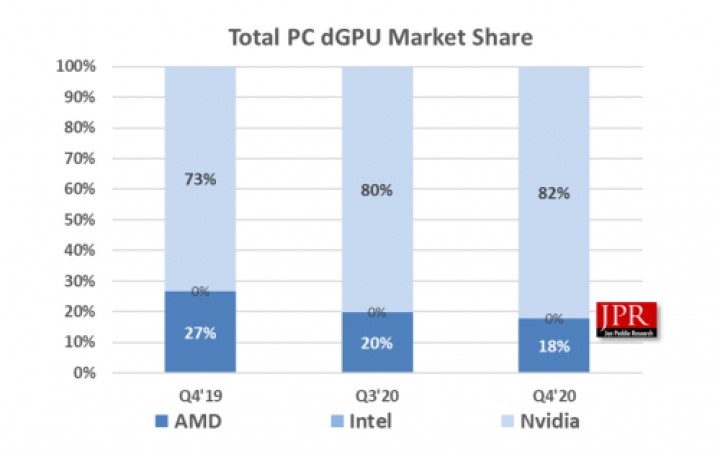 The graph showing the share of AMD, Intel and Nvidia in the dedicated GPU market. Source: Jon Peddie Research

The reason for such a result is, of course, the COVID-19 pandemic that affected the entire technological (and not only) world. Another thing leading to the result were the problems that TSMC's microchip factory located in Taiwan, whose customer includes AMD, has been struggling with for several months. The company confirmed over a month ago that problems with the availability of components will affect the production of not only GPU but also PlayStation 5 and Xbox Series X|S.

Soon a new GPU from the middle price range - Radeon RX 6700 XT - will be released, but we should expect a limited supply. According to Dave James from PC Gamer, the largest online electronics retailers may consider themselves lucky if they receive one or two units of the latest components .