Two days ago, the historical fighting game Hellish Quart from Polish studio Kubold made its debut in Steam's Early Access. We're happy to report that the game had a pretty successful launch. The title has been positively reviewed by 95% of players. Users praise, among others, the realistic combat system and great animations.

"This is the closest representation of HEMA (Historical European Martial Arts) I've ever seen in a video game and I must say that the animations look great! Sure, there are some problems, a few guards are missing and the footwork frankly sucks :) But by checking the moves and experimenting you can really learn a lot about historical sword fighting!

The developers have put forth a great development plan, with many exciting updates on the way, such as new fighting styles, skins and characters to unlock!

This is a must buy for all sword fighting enthusiasts, and at the same time the game is a great bargain at current price.

SteamDB stats show that the game has attracted quite a decent number of players - at the best moment of the last 24 hours 509 people played Hellish Quart at the same time, and all-time peak is 755 users (the record was set on launch day). Of course, this data isn't comparable to the biggest hits, but it's worth remembering that we're talking about a specific "niche inside a niche" - fighting games aren't titles which break popularity records on Steam, and Kubold's game approaches this genre in an unusual way, putting more emphasis on realism and down-to-earthness than on fast action and spectacular moves. 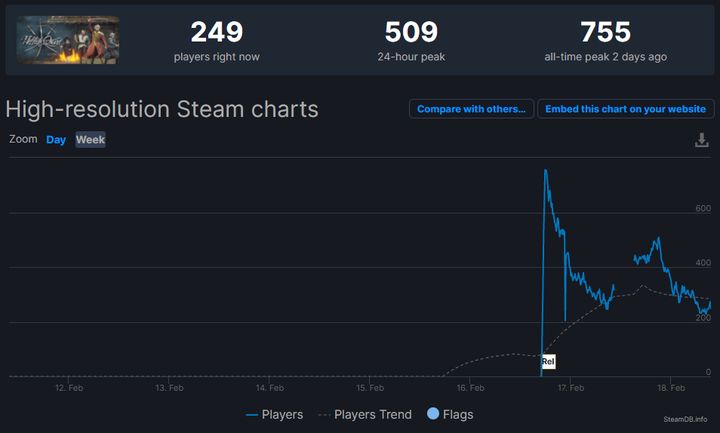 The action of Hellish Quart is set in 17th century. In thr game we get to control authentic warriors using real weapons from the era. The combat system has been designed in such a way that even one hit can end up in death of one of the combatants (in this respect the game resembles the iconic PS1 series Bushido Blade). The key factors are dexterity, timing and the ability to see through the opponent's tactic. The game is available only on Steam - if you're interested, we encourage you to check out the free demo.

Let's Watch the Landing of Perseverance Rover on Mars [UPDATED]