Amazon's CEO Jeff Bezos shared his feelings on the success of New World, the company's first major game, which became a commericial hit after months of battling beta bugs and delays. He praised the team behind the title, and sees the company's previous troubles in game development as a helpful lesson. 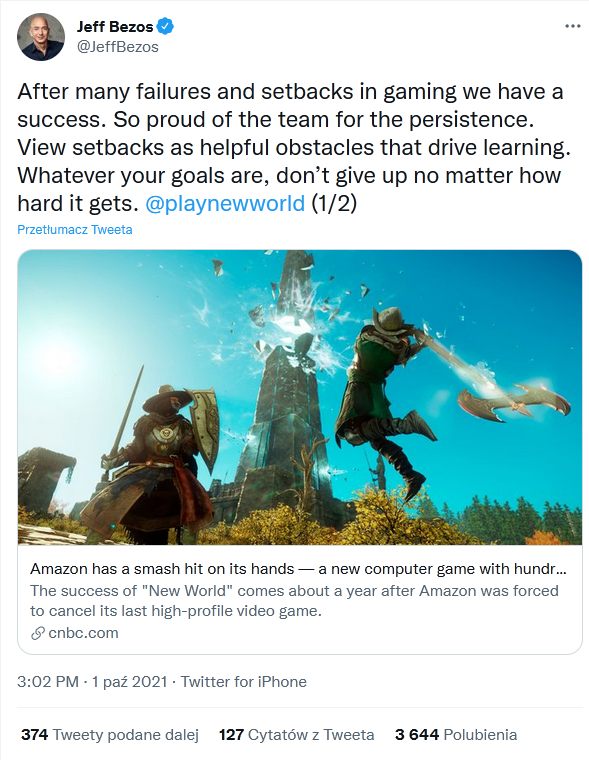 In his post, Bezos also included links to two articles that do a great job of showing Amazon's journey as a game developer. Just eight months ago, Bloomberg wrote that Amazon could successfully produce almost anything it undertook: movies, TV series, e-readers, wireless speakers - except good video games. Between 2014 and 2019, Amazon Game Studios released eight games (mostly mobile) that rather few people know about or remember.

All of the bigger games Amazon has worked on have been canceled including Breakaway (a fighting game set in a mythological world) and Lord of the Rings MMO which we wrote about here. The biggest image blunder of the company was the end of development and closing the servers of the co-op shooter Crucible just six months after release.

Almost a year has passed since the shutdown of Crucible to the release of New World. The launch of the latter has been delayed several times due to the developers struggling with bugs and optimization, and the scandal with the destruction of some GPUs during beta testing cast a shadow over the upcoming release of the full version. Today, the media is dominated by articles describing Amazon's new title as a big hit with hundreds of thousands of players, and statistics from Steam fully confirm these reports.

Top 5 games in terms of the number of simultaneous players. Source: steamcharts.com

A few days after the release, New World is competing on Steam with CS:GO for first place in the ranking of games with the most players, having more than half a million users playing at the same time. Dota 2, PUBG and Apex Legends follow close behind. On Amazon's Twitch channel, New World is in first place in terms of viewership with over 270,000 viewers.

Interestingly, on Metacritic, an overwhelming number of players gave negative marks to the game, mainly due to bugs and server issues. Industry reviews are still being compiled, including ours, but the two that have already appeared are decidedly favorable - New World received high ratings of 80/100.

Paradox Cancels Unannounced Projects in Return to the Roots