It seems that time of impunity in Kingdom Come: Deliverance is coming to a halt. The 0.5 update to the games Tech Alpha (available for backers) introduces crime system, or rather penal system. Starting now, stealing from or attacking people will cause an appropriate reaction from NPCs. If you happen to be caught red-handed, there are several things you can do: talk your way out, humbly go to jail, or agrresively resist arrest. If you decide on that latter solution, remember that fighting multiple opponents is even more difficult now, due to AI improvements and greater variation in skills and equipment of individual enemies. Speaking of combat, while fighting you will also notice that music now dynamically adjusts to what is happening on the screen. There are also new RPG and survival elements  characters need to eat and sleep to stay in shape. On top of that, the creators included a bunch of technical tweaks and fixes. 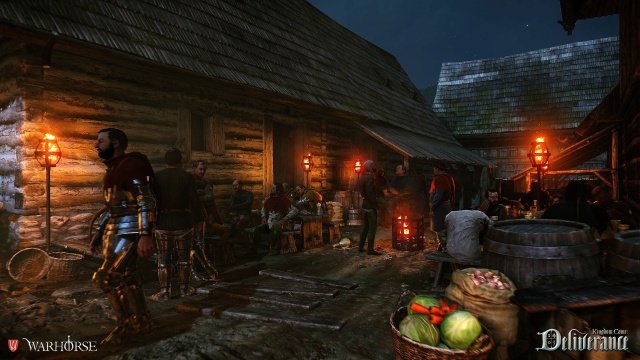 The developers say that Tech Alpha 0.5 is the last update before the launch of beta version. Right now Kingdom Come: Deliverance is playable for those who backed the project on Kickstarter or later on the games official website. Warhorse is inviting fans to watch a Live Stream and live Q&A session with the Creative Director on Tuesday December 1st, 7 PM CET, on their Twitch channel.