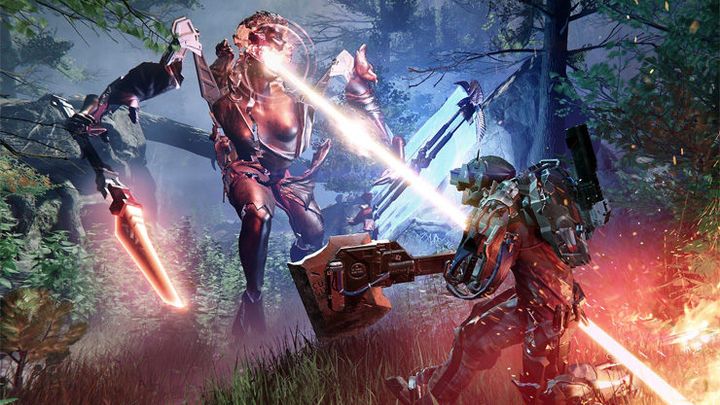 Today, The Surge 2 - a "soulslike" action RPG from the German studio Deck13 Interactive - debuts on the market. The title is available on PC (Steam) as well as Xbox One and PlayStation 4 consoles. The prices begin with $59.99 for the standard edition.

The first reviews of the title have already appeared on the web, and if we trust them, we are dealing with a successful continuation. Reviewers most often praise the combat system and well-designed locations - much larger and more open than in the previous installment. Among the mentioned drawbacks there is a predictable story and too low, for a "soulslike", level of difficulty.

"Varied environments also keep things more engaging and are by far the biggest improvement over the original. From the urban jungle of downtown Jericho City to the actual jungles and forests in the nearby Gideons Rock, The Surge 2s areas are all colorful and intricately designed for players. Like the best Soulslikes and the actual Souls games, strong landmarks keep players aware of their location without a map and there are tons of shortcuts to reward progression," Tomas Franzese, DualSchockers.

"Developer Deck 13 is so, so close to putting out a good video game. After failing to capitalize on the clear potential of The Surge, the studio is back with a sequel that is bigger and better in almost every way, but it continues to slightly miss the mark in one too many key areas. The Surge 2 will satisfy those looking for their next Souls-like dosage, but a shift in focus to a more open world framework brings about a new set of problems the original never faced," Liam Crosft, Push Square.

The opinions about the game on Steam are mixed. Many users give a positive feedback (63%), but there is no shortage of people complaining about technica issues and shortcomings in general.

"However if you're not someone like that here's my first impression. I really enjoy the way you get new equipment more than I thought I would. The executions are cool (Tho they aren't many) and I've enjoyed collecting various sets so far. The combat is a little confusing. I can't really tell what I need to do to confirm a stagger yet. Mostly how I've been playing is dodging and waiting for openings. The weapons are neat, however the game gave me these duel swords that stack a dot that does MASSIVE damage when the bar fills. It's just plain better than anything else I have," Doomstoth.

"I think this game is more of the same. The combat has improved, and now feels a lot more interesting and versatile. The addition of partial set bonuses, and loadouts help streamline the experience. Wile I feel the setting, atmosphere and story-telling felt a bit underwhelming compared to the first game. I still found them interesting, just not as gripping as the first Surge," MrWoodenSheep.

"Would not recommend in it's current state. The game has a lot of performance issues, to start off with. Enemies can hit you and not be near you. Blocking is so terrible you might as well just evade everything. I'm super disappointed in the release. Also the create a character the devs made sound like you were gonna be able to do a lot with is terribly basic. Alot of the textures look terrible," A.R.K.A.N.G.E.L.