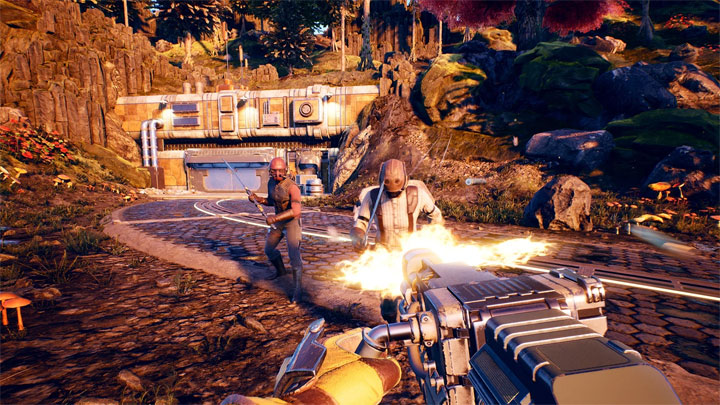 The developers are positive that the game will launch this year.

THE OUTER WORLDS IN A NUTSHELL:

The Outer Worlds, the upcoming RPG from Obsidian Entertainment, has become one of the main topics of the next issue of Game Informer magazine. The enabled us to learn a lot of new things about this project.

The game will feature only two main planets, but we will also be able to explore moons, gas giants, asteroids and space stations, among other things. The Outer Worlds, however, will feature no space suits, so each of the locations we are going to visit will have an atmosphere suitable for breathing.

The player will be able to play as a human, and the setting will lack intelligent alien races. The game will offer the possibility of naming the protagonist, but the NPCs are to refer to him/her as either "captain" or "boss". Instead a morality system The Outer Worlds will feature a reputation system. It will affect, among other things, the character's relations with several factions existing in the game world, which we will be able to join.

The Outer Worlds will feature a day and night cycle. However, there will be no cooperation mode or the option to switch to TPP camera. The authors do not plan traditional boss fights either, although there will be battles with a higher level of difficulty than standard. In addition, hitting different parts of the enemys body will result in different effects.

Hacking will appear in the game, but will not be implemented in the form of a mini-game. Additionally, the players will be able to manipulate robots so that they turn on each other. There will be no option to control alien fauna though. The authors have also revealed that the campaign can be completed without the help of companions. However, these characters are supposed to be very useful, especially when we complete their unique side quests, which will increase their combat capabilities. At most difficulty levels, when a companion's health bar drops to zero, he or she will lose consciousness. Only on the highest one, called Supernova, will they be able to die permanently.

The authors consider releasing modding tools, but if they appear, it will only be some time after the release. The devs also have some ideas for DLC with new worlds and a sequel. The Outer Worlds is guaranteed to be released this year on PC, Xbox One and PlayStation 4. The developers are almost sure that they will be able to reach 4K on Xbox One X and PlayStation 4. Finally, they mentioned that about 20% of the team working on this project had previously worked on Fallout: New Vegas.