Friday saw the release of update 3.13 for Path of Exile, which introduced the Echoes of the Atlas expansion. DLC's release was a huge success, enabling the game to set a new activity record on Steam.

On January 15, the patch's release day, 157,103 people were playing Path of Exile on Steam at the same time. This is the best result achieved since the game's launch in 2013. It is worth noting that these numbers do not fully reflect the popularity of the PC version, because PoE also has a standalone client, enabling us to play outside Steam. 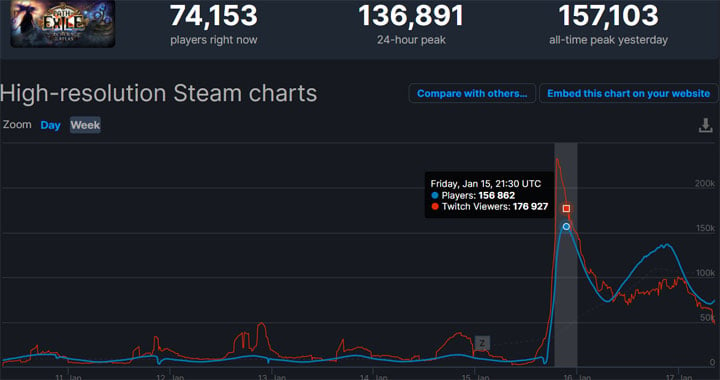 Currently, the Echoes of the Atlas update is only available on PC. However, console players will not have to wait long for their version. The expansion will be coming to Xbox One and PlayStation 4 this Wednesday, on January 20.

Echoes of the Atlas introduces, among other things, eleven new maps, a series of battles with increasingly numerous groups of bosses, additional trees of passive skills and a new league of challenges.

Many indications are that the expansion will be the last major add-on for the first installment to be release this year, as the devs want to focus on the sequel. First installment will be further developed, but the updates are to be more modest.

Echoes of the Atlas is also interesting because its visual style is reminiscent of what Path of Exile 2 will offer. Some of the expansion's visual elements are taken directly from the upcoming sequel.

Scope of Nintendo's Success in Japan and US is Staggering