Rockstar Games has addressed the huge leak of materials from GTA 6 that took place over the weekend. In a post on Twitter the developer confirmed the hacking of its servers and the theft of sensitive data, including footage from an early version of the new installment Grand Theft Auto series.

The American studio also expressed disappointment that gamers around the world learned details about the next GTA like this. Hardly surprising, since after years of questionable leaks and keeping everything strictly secret, a huge amount of information and materials from the formally unannounced project has leaked onto the Internet. 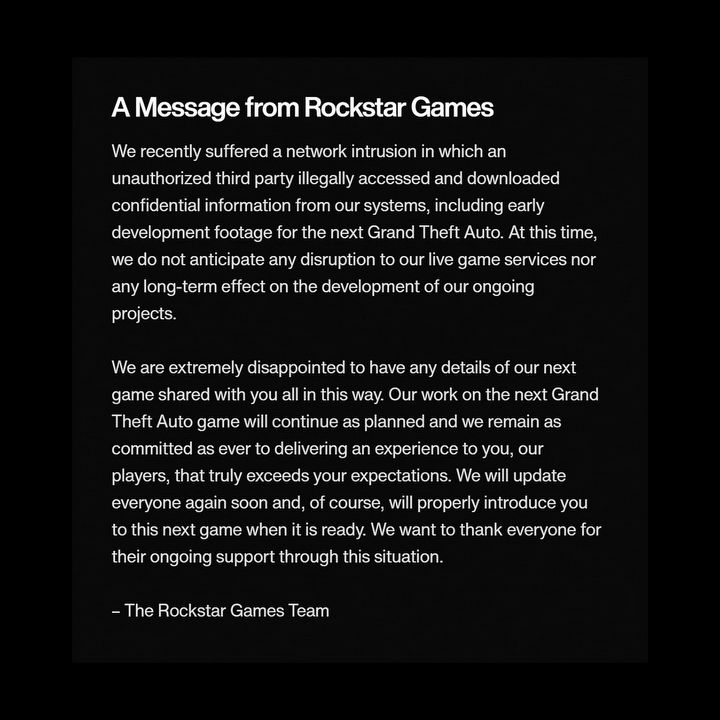 Rockstar isn't thrilled with how the world found out about the new GTASource: Rockstar Games on Twitter.

At the same time, the team at Rockstar Games assured that the data leak will neither affect the development of the studio's current live-service games, nor the work on new titles. This includes Grand Theft Auto VI, over which - contrary to suggestions from Internet memes - the developer will continue to work as before and will officially announce the new game as soon as it is "ready."

It was also promised to share an "update" soon, although it was not specified whether it would apply only to GTA 6, or the entire leak and its possible consequences for the company. These may turn out to be more serious than Rockstar Games' tweet implies (at least judging by the reports on the mood of the company's employees).