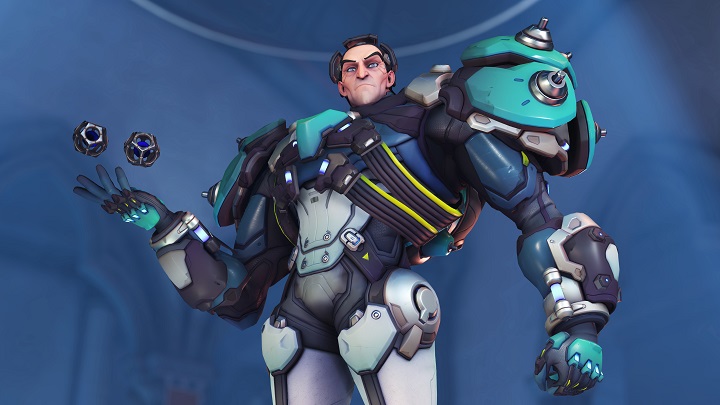 Some people need only a pair of Chinese ying-yang balls from the bazaar to relax.../ Source: Blizzard.

UPDATE: Sigma is now available in the Public Test Region. Blizzard officially introduced the character: Sigma is an eccentric astrophysicist and volatile tank who gained the power to control gravity in an orbital experiment gone wrong. Manipulated by Talon and deployed as a living weapon, Sigmas presence on the battlefield cannot be ignored." We already know his abilities:

Three of the above abilities (Hyperspheres, Kinetic grasp and Gravitic flux) were to some extent predicted by Reddit users, deciphering the equations placed in the teaser.

On July 20, Jeff Kaplan, Chief Designer and Director of Overwatch, announced a new hero on Twitter. The studio wasn't very eager to share in details at the time - accompanied by a crying piano, we could see how the developer being consumed by nothingness and some mathematical formulas.

Today we know that it was a teaser of a new character, astrophysicist Sigma (and that Kaplan is fine). Now Blizzard has shared a short video with the story of the brilliant scientist. Everything seems to indicate that he devoted most of his life to research the benefits of controlling the energy of gravity field. Then he got a little ahead of himself and wanted to control the energy of black holes as well. And everything would have been fine if it hadn't been for the fact that he probably made it. It is difficult to determine what is actually happening in Sigma's head on the basis of the material, apart from the fact that the same piano music plays in it, and that he acquired a light case of, if we may put it this way... mental instability. What we do know is that he can control gravity, is not a positive character (one can assume that he belongs to the Talon organization) and, interestingly, as the creators reveal, he does not realize that he is used as a living weapon.

If you have ever seen the movie Pi about a brilliant mathematician, Sigma's fate, with a few minor modifications to the universe, could actually be an alternative ending to this story. While the mind of the new hero of Overwatch seems chaotic and devoid of reason, there is much to suggest that Sigma just understood... everything.

He should be in the game at the end of this week.