Sonic Frontiers did not have an easy time before its release - the official gameplay presentation indicated a boring title without character. It wasn't until the first reviews came in that the world saw a shadow of hope for commercial success. Today - almost a week after the debut - one can say without fear that gamers have become fond of this title. According to some fans, it may even be a candidate for game of the year.

SEGA got a new gem

Sonic Frontiers PC is available on Steam. On Valve's website, as many as 95% of the 5759 reviews are positive, which translates into an "overwhelmingly positive" reception of the game. What's more, the title can boast a record of 19,181 concurrent users on the day of release on PC. 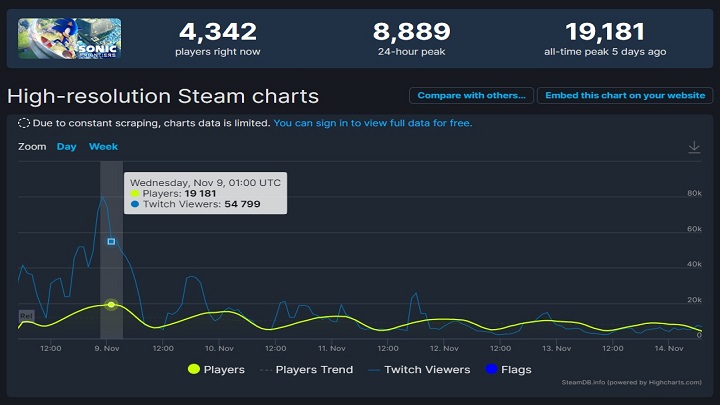 Also, the PC version's ratings on Metacritic leave no illusions. The average gamer rating is 86/100 based on 258 reviews, a rare result - users of this website tend to underestimate titles compared to reviewers' opinions. A good example is Uncharted: Legacy of Thieves Collection's PC version, which has a very good official rating average (88/100), while among gamers it has only 43/100.

The game's release is just the beginning

Morio Kishimoto, director of Sonic Frontiers, shared his thoughts on the game on Twitter. According to Morio, the launches were nothing more than a global test to supply the Sonic Team with feedback from players and critics. The end result is expected to translate into the development of the brand, as well as the studio's future games. Below we provide a translation of the original post.

"I'm very sorry I couldn't get in touch with you, because I've been busy since the launch. I'm relieved to see that it seems like the game has reached everyone safely on the release day. We are checking the feedback from critics and you, the players. As you have pointed out, we still have a long way to go and are treating the launch as a global playtest."

You Hoped for Conclusion to Peralez Plot in Cyberpunk 2077 DLC? Forget It

Now This is Proper Skyrim Remaster