Twitter user AccountNGT shared some unofficial details about the development process of Star Wars Eclipse. The same person shared a graphic from the game's trailer a week before its release, so we can assume that he is rather well informed on the subject. This time we got a list of all information regarding the development process.

It's worth noting that AccountNGT's account has already "evaporated" from Twitter, so apparently someone expressed their dissatisfaction with the fact of continuous leaks related to Star Wars Eclipse.

Star Wars Eclipse is supposed to be an open-world game with multiplayer mode. The title will offer a non-linear storyline and a combat system reminiscent of that from EA's Jedi Fallen Order. AccountNGT claims that however, the main inspiration for the creators is the The Last of Us series. In the game we can also expect more playable characters than in previous Quantic Dream titles. 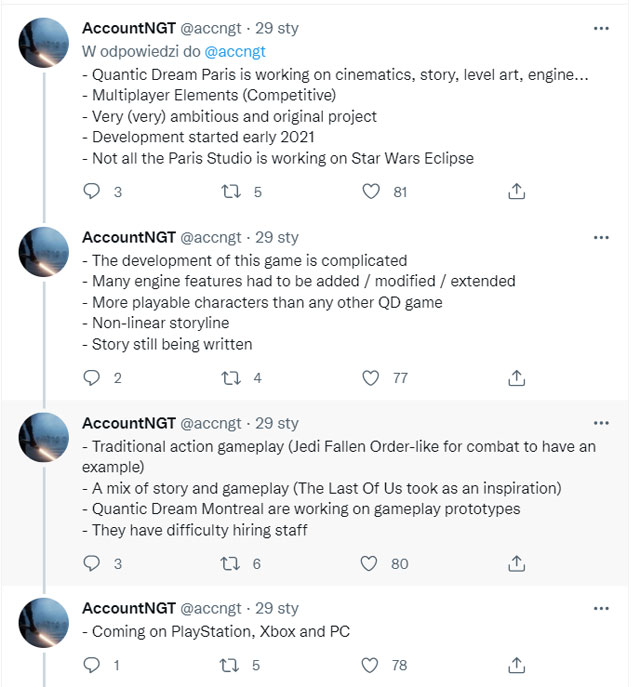 Another important topic are the on-going development issues and difficulties. The game is said to be very ambitious and innovative. Work on it began in early 2021, and the storyline is still being expanded. The game engine has also already required tweaks and additions. Problems with hiring staff were also mentioned.

The development is divided between Quantic Dream Montreal and Quantic Dream Paris. The former is responsible for multiplayer, gameplay and level design. Paris is working on cut-scenes, story, ambient graphics and the game engine. 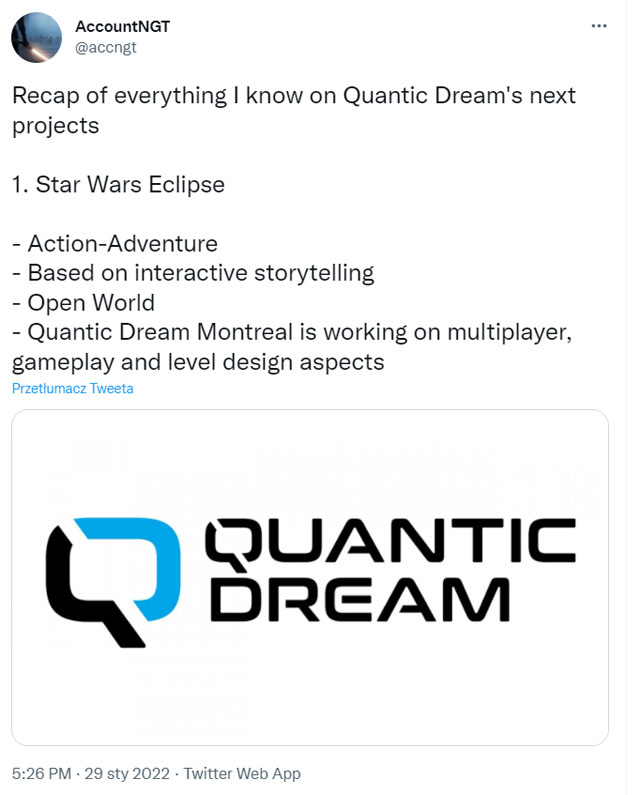 Star Wars Eclipse was announced during The Game Awards 2021. The action will be set in the era of the High Republic, which distinguishes the title from previous games from this universe. On the game's official website the creators guarantee the players "a chance to create your own story in the world of Star Wars". On the one hand, we have reports of it being a pioneering project for the industry, and on the other leaks about the problems during its creation.

AccountNGT also emphasizes that part of Quantic Dream Paris is not involved in Star Wars Eclipse. It is assumed that this part of the studio is currently working on the Dreamland project based on the Dark Sorcerer demo, presented at E3 in 2013.