Maciej Dobrowolski - marketing manager at Starward Industries - contacted us and declared that the provided requirements should be treated as preliminary, because the team intends to refine the optimization, so that Invincible can be played by as many people as possible.

All indications are that the work on The Invincible, a retrofuturistic FPP adventure based on Stanislaw Lem's novel of the same title, is going quite smoothly. Starward Industries, the company responsible for the game, announced today that the title will be released "later in 2022" - on Epic Games Store. However, we know from our own sources that it will not be an exclusive title. In other words, the release will be simultaneous on Steam, as well as PlayStation 5 and Xbox Series X and S, among others. 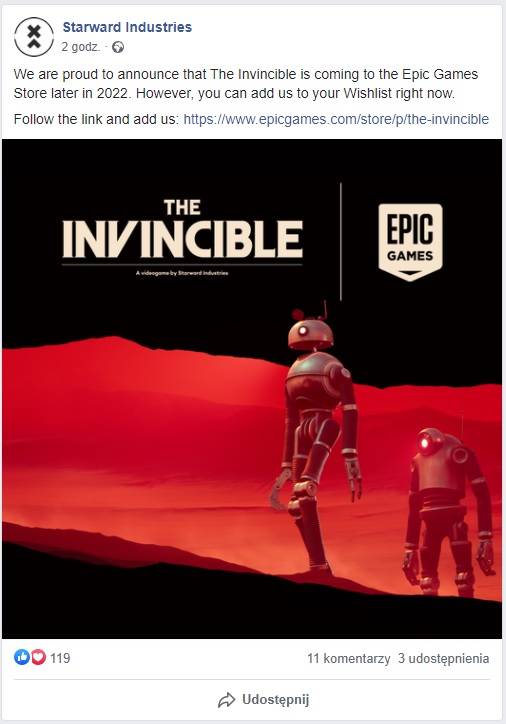 This is also evidenced by the tab of The Invincible on Valve's platform, which shows the same date. What's more, we can also find there the system requirements of the PC version of the game. They are quite high - at least for an adventure game.

At the end, I remind you of the two trailers for Invincible, which we had a chance to see so far. You can find them here and here. More information about the game itself can be found in our Encyclopedia.

Games With Gold for February 2022 (Broken Sword 5, Hydrophobia, and More)

Epic Games Store is Doing Better, Though It Still Relies on Giveaways

Ubisoft Gives Up and Shuts Down Its Battle Royale Game