Michel Ancel, the famous game designer working for Ubisoft, who is father both to Rayman and Beyond Good & Evil, posted an intriguing picture on Instagram. This looks like a piece of concept art from his upcoming project with a comment: Somewhere in system 4  Thanks Ubisoft for making this possible! 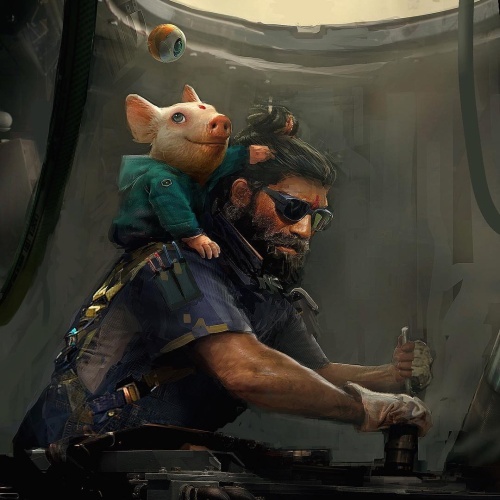 Michel Ancel teased his upcoming game. Is that young Peyj on that mans back?

Fans will immediately get the reference to Beyond Good & Evil. After all, System 4 is where Jades home planet Hillys was located. Moreover, the littly piggy on the mans back seems to be kin to Peyj, Jades faithfull mechanical-minded companion  who knows, perhaps its Peyj himself? On the other hand, we have no idea who the man in the picture is; a fan suggested he may be Jades father. If these speculations are true, the next Beyond Good & Evil may turn out to be a prequel. That would mean that the game went through a major concept change since the release of the first teaser trailer back in 2008.

Sadly, the only official information on the project so far is that it is still in works. If you are interested in rumors, earlier this year Destructoid reported that Beyond Good & Evil 2 (or supposedly Beyond Good and Evil: The Prejudices of Philosophers) is being funded by Nintendo and is coming exclusively for Nintendo NX.

Cyberpunk 2077 may feature seamless multiplayer and a huge living city

Cyberpunk 2077 may feature seamless multiplayer and a huge living city