There is no room for uncertainty, and Arkane Studios has just ensured us that visiting Talos I spaceship wont be a walk in the park. In fact, surviving in Prey will require you not only to be able to handle all kinds of guns (enough to neutralize your sluggish opponents), but also to learn from your previous experiences, which will enable you to develop some pretty sophisticated skills. But first, before I go further into detail, enjoy the gameplay trailer.

Those little fancy little headcrab rip-offs? These are called Mimics, and their motto is dress to kill, as they possess the ability to turn into whichever object they like, and then attack Preys new protagonist  Morgan Yo  should he get too close to them. What sorcery is this we still dont know, but as it turns out during your leisurely stay on the Talos I spacecraft you will be able to disguise and trick your enemies in pretty much the same manner, transforming into, say a mug. Spooky, right? But thats only after youve learned how to actually do so, and heres where plasmid-like injections may come in handy. 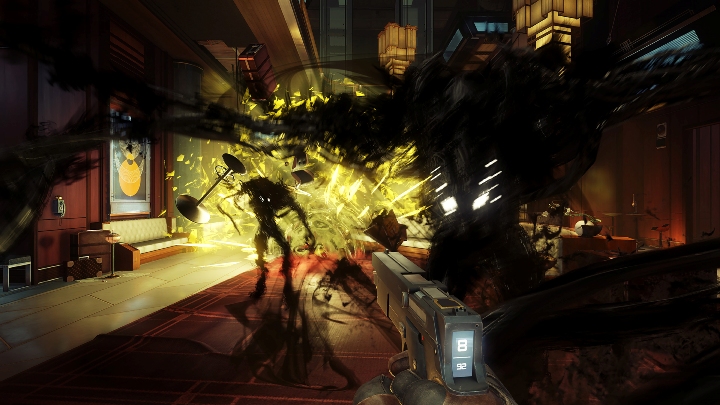 Explosions are just one way of dealing with Preys shadowy threats.

But mimicking seems like a raindrop in the ocean of possibilities the new Prey promises to offer. Among them are also things like using a GLOO Cannon to immobilize your enemies with adhesive puddles, nuking them with the Superthermal ability, or enabling a zero-gravity propulsion system to clear the way ahead of you, just to name a few. The point: the game seems like a completely new IP, having absolutely nothing to do with its 2006 predecessor. Im not saying you should immediately jump on the hype wagon, but it might yet prove itself to be one of the most interesting action games coming out next year.

Prey is to be released sometime in 2017 on PC, PlayStation 4, and Xbox One.