Viewing the job listing for Cyberpunk 2077, the next big RPG from the creators of the Witcher series, reveals that the game will feature all sorts of drivable vehicles and machines.

Fans of farming sims have another title to look forward to. Pure Farming 17: The Simulator from Techland Publishing is promised to include some essential features missing from similar titles. 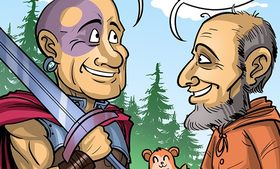 Mr Baldur is done with gates. He has something new in stock.

Syberia 3 looks prettier than ever at these gamescom 2016 screenshots

Check out the latest Syberia 3 screenshots and compare them with the ones shown at last year's gamescom. The difference is clear - Syberia 3 is getting prettier!

If you love crazy stunts and destruction, then Stuntfest is definitely something for you. The creators of the FlatOut series and Next Car Game: Wreckfest are going wild in this next sandbox stunt simulator.

Writer Andrzej Sapkowski, the creator of The Witcher universe, has recently been rather vocal when presenting his views on the game series' influence on his literary work and how he thinks the sales of his books might have suffered as a result.

How The Witcher 3 came to life? – discussion panel with CD Projekt RED

The developers from CD Projekt RED talked about how the game came to life, the development process, challenges they encountered and what ultimately didn’t make the final cut.

Recently we've seen a gameplay footage from Elex, and now the developers at Piranha Bytes decided to share a handful of interesting new details on their upcoming action RPG.

Bruce is an upcoming Sin City-inspired noir game developed by Logic Artists. Set in a “dark city of future,” it will tell a story of a man who will have to sacrifice everything to save his beloved woman.

Escape from Tarkov technical alpha is live, see how to get in

Escape from Tarkov is currently being alpha tested. In order to participate in the closed alpha you need to have pre-ordered the game and filled some forms.

Does deep sea exploration and submarine combat sound appealing? Then the newly revealed Diluvion is definitely something for you.

Fans have voted with their wallets for the arrival of Prey for the Gods - a spiritual successor to 2005's Shadow of the Colossus. Having been successfully funded on Kickstarter, the game is headed for PC, XONE, and PS4.

Shadwen gets a free content update Escape From the Castle

If you have completed the base storyline of Shadwen and still want more, you will be happy to hear that the stealth game receives a free content update, Escape From the Castle, which adds 14 reworked levels.

The Witcher 3: Game of the Year Edition has just received an official trailer, which reveals the exact release date.

A pre-alpha gameplay footage of Harebrained Schemes’ newest IP, BATTLETECH, has just hit the web. It shows the game’s turn-based combat, lets you peek at its visuals, and includes a developer commentary.

We’ve taken a closer look at Gwent: The Witcher Card Game’s single player campaign - and we've been blown away by how dense and detailed it turned out to be.

Vampyr gamescom 2016 gameplay shows how every decision you make matters

Vampyr, Dontnod Entertainment’s action RPG, has been showcased on this year’s gamescom. We’ve learned that you’ll have to carefully choose your victims, for the consequences of killing everybody might cause more harm than you would expect.

Mortal Kombat XL will get a PC version

It appears the PC fans of Mortal Kombat have finally been heard. Creative Director at NetherRealm Studios has teased Mortal Kombat XL coming to PC.

The civilization series is celebrating 25 years of its existence among gamers with a special collector’s edition of the upcoming Civilization VI. The bundle will even include a set of coins, among many other bonuses, such as an artbook or soundtrack.