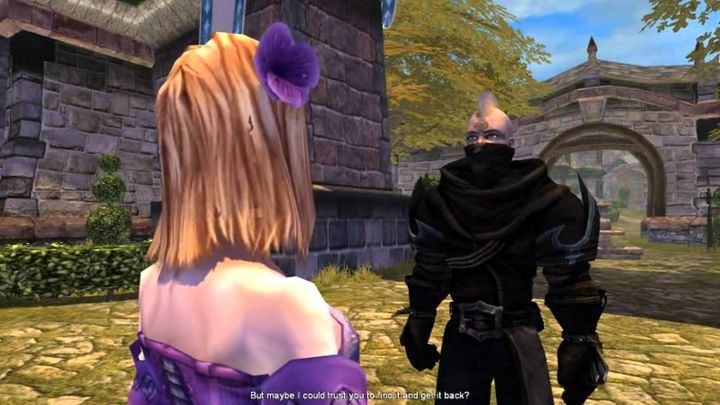 Love has many names.

Don't be fooled by Fable's aesthetics  it is a true school of life. We start as a kid who can barely carry a weapon heavier than him, only to end up as an old man suffering from back pain and struggling to carry a sword heavier than him. Only our decisions affect who we become, and in addition to the classic action role-playing game, we also have to find ourselves a place in the society. The game was originally released on first-generation Xboxes, and later released in a revamped edition (as The Lost Chapters) on PC.

Nothing stops you from leading a peaceful and noble life in the land of Albion. However, as we know well, man are weak and easily succumb to temptation. The game's creators allow for a relationship to be built with the NPCs, and in particular cases, a marriage may even occur. This option can be abused by players.

It seems culturally appropriate to bind yourself to one wife. However, some dream of a real harem, which is impossible due to the conservative values that the characters in the game seem to hold. So there are three choices. First, you can get married in several different villages and have a couple of wives at the same time (the limit for simultaneous marriages is five). Second, you can kill your first wife if you become bored. Third, you can spare yourself a wedding and limit yourself to flirting by promising your other half gold. Cruel and sexist  that's what Fable is.

I don't really abuse NPCs that much. I focus too much on the plot of the game and don't want to spoil my immersion by killing random bystanders in the street. It's different when the gameplay mechanics force bullying of other characters. That's when I easily get carried away. I'm familiar with Dooms, Postals and even the stupid Goat Simulator. Not to mention the absolute classic that tells the true story, which is Neighbors From Hell (oh, I played it a lot as a kid). Okay, it turns out that sometimes I like to vent off. I'm not an innocent, let me get back to smashing gangsters in Hotline Miami.