Just Cause  tying people to objects with the rope 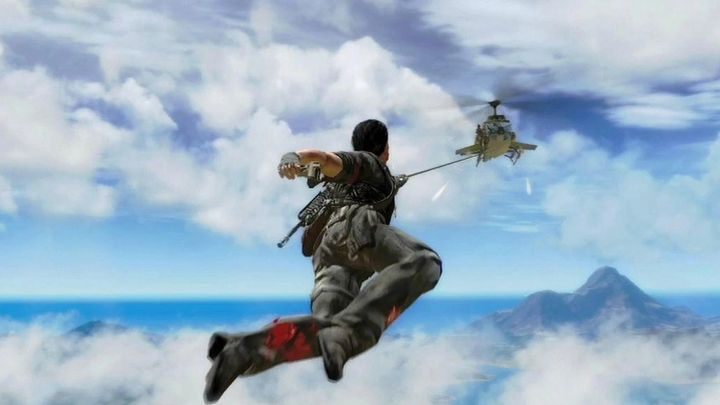 Don't rub your eyes in amazement, it's not Spider-Man. That's Rico Rodriguez.

Just Cause is a real sandbox, and the subsequent installments bring better graphics and a few minor improvements. Each installment of the game is a veritable definition of chaos, which is obscuring even the plot. But the plot is just a pretext to wreak havoc, while testing the psychophysical strength of the inhabitants of the area. The act of destruction is carried out by Rico Rodriguez  a cult hero with a doubtful moral backbone.

Rico has something no one else has  a distinctive element of his equipment that allows for many creative types of demolition. We're talking about a rope with a hook, which is the modern equivalent of a lasso. Except that this device is deadly in itself. So it would be foolish not to use it.

These anchors usually need to be linked to two targets. There is almost always a man at one end, in this case a musician singing in the middle of the city. The second tip should be attached to the selected surface or object  preferably movable. The car is a tried choice  the musician will be tossed away with great force. It also doesn't have to be art for art's sake; these murders can be useful. All you have to do is strap a passerby to a jetpack and fire it towards an enemy military base. That's called killing two birds with one stone.