There’s a funny story related to writing of this piece. Some time ago, we organized a vote among our editorial staff for the best strategy game. We didn't set out any details at the time, everyone could just name their favorite titles.

After counting the votes, it turned out that 75% of our top 20 were games released in the 1990s, and the youngest one was released in 2010. This may, of course, mean that we are extremely sentimental, but it is quite likely that we are just long past the golden age of strategy games and today, they simply do not make video games like they used to. 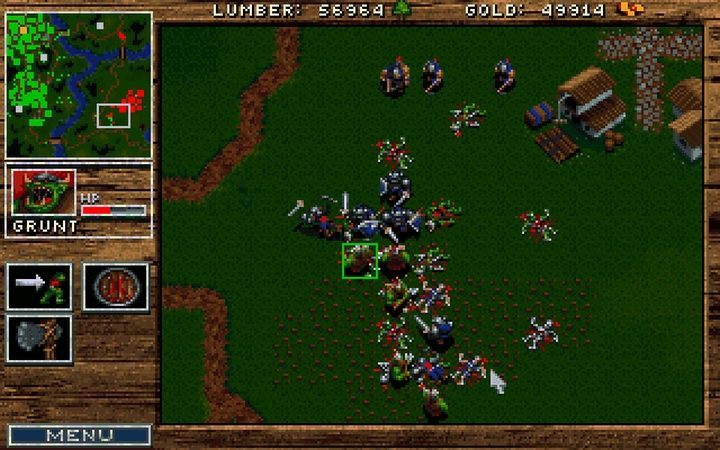 The war between humans and orcs is no picnic.

We begin with a bang with the game that started one of the most recognizable franchises in video game history, and was the first big hit of Blizzard Entertainment, the studio that today... ok, we all know what Blizzard is today.

The first Warcraft brought to life Azeroth, the fantasy realm where a great war between races of humans and green-skinned orcs has just begun. While it was not the game from which the history of all real-time strategy game began, it was a highly innovative title for its time.

Let us remember that in 1994 RTS was a genre that was just being born and shaped, so something as obvious today as the possibility of selecting several units at once (as many as four!) seemed like a small revolution. This was not the only solution that added depth to Warcraft's gameplay, which the competition lacked.

1989 – Herzog Zwei (console prototype, with many important features of later RTS games. The creator of Dune II, Brett W. Sperry, admitted that he was inspired by this production.)

Blizzard's game was also notable for its rich and varied campaign, in which the devs were not afraid of bold experiments. An example of this would be missions where we could not build a base and therefore had a limited number of units at our disposal. The whole was complemented by a dark fantasy atmosphere, which literally poured out of Warcraft thanks to the fantastic audiovisuals. It is this atmosphere that has permanently entered the consciousness of hundreds of gamers, many of whom have remained forever faithful to the series and the genre itself.

The brand created by Blizzard is now as profitable as the oil fields in Kuwait. The universe created for the game grew to a size comparable to Star Wars' Expanded Universe. By contrast, the first Warcraft has aged horribly and is rather difficult to take any pleasure from playing it today. Nevertheless, it will forever remain the beginning of one of the most important stories in the world of video games.

Warcraft was not the first game of the California-based team. In the early 1990s the company was called Silicon & Synapse and was involved in porting games of other developers. The team's second game (the first one was RPM Racing on the SNES) was the arcade game The Lost Vikings. It told a rather peculiar story. Its main characters were three Vikings who were kidnapped... by the evil space lord Tomator. The player's task was to guide the brave warriors so that they could safely escape planet Crouton and return to their village.