I recently wrote an article about the antidepressant potential of gaming. I tried to base my thesis on scientific research and a neurobiological basis. This approach, despite obvious advantages, also comes with a hurdle  the scientific research on the effects games have depression symptoms isn't as popular as it might seem. The available research seems to confirm the general principle that electronic entertainment can positively affect mood, but there's not much specifics.

Which gaming genres have particularly beneficial impact? Why is that? Is it the mechanics, the graphics, or audio design? These are questions science hasn't answered so far. However, the individuals who went through depression and used video games therapeutically, can give us a lead. In preparing this text, I mostly supported my arguments with accounts  mostly YouTube vlogs  of creators who talked about the role of games in their struggle, or the struggle of their guests with affective disorders. Based on their accounts, I have created a list of six games (or, more broadly, genres) that seem most helpful in combating specific cognitive distortion, or developing specific competencies weakened by depression.

Of course, the nature of the evidence presented herein is obviously anecdotal, and we have to remember that cases of severe depression won't be solved by playing The Witcher. This article is not a remedy, nor a strictly scientific text. Depression is a serious illness and should be treated with pharmaco and psychotherapy  all other methods are rather complementary.

With that in mind, I present six games that can help with depression, and the seventh one as extra. And these have been proved by at least a few real-life cases.

Have a break from life  Doom Eternal 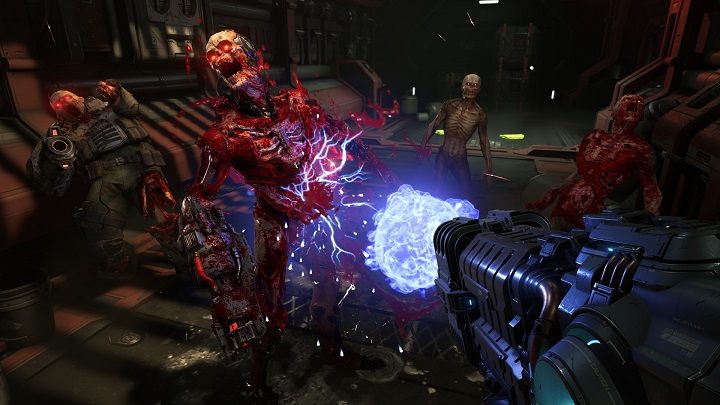 Sometimes we don't have the capacity to beat the reality. Fortunately, demons are much more straightforward.

Escapist coping strategies are often considered inferior and are advised rather than recommended. In fact, improving mood by escaping reality is usually a short-lived respite, and simply ignoring the world often results in an accumulation of problems, but there are instances where this works surprisingly well.

After all, we don't have to be facing our problems every minute of the day. Sometimes, you just need to relax, cut the chatter off, and regain your strength, so that you can deal with reality with more poise later on.

Sometimes, the circumstance makes "waiting it out" the best solution. For example, the initial stages of treating depression often bring about temporary deterioration of the psychological condition. The reason for this is the way pharmaceuticals interact with the brain, and it's a tad too complicated for a brief piece about video games. One way or another, it ultimately means that it usually gets worse before it gets better.

And indeed, a quick, highly engaging action game may offer the much-needed relief for a troubled mind. We don't have to look far for this kind of a game  the recent Doom Eternal is exactly this type of a game.

Ketamine, originally an anesthetic, is now one of the most popular recreational psychoactive substances in the United States. Due to its dissociative effect (it separates signals responsible for perception from those responsible for emotions, highly distorting the reality) it is used as a drug to produce the sensation of being separated from the body, daydreaming.

However, it turns out that intranasal ketamine has a strong and  most importantly  immediate antidepressant effect. Trials are currently underway, meant to improve mood in patients in the early stages of treatment for depression before classic antidepressants take effect.