If I had to choose the best April Fools' Day story in the video games industry, I would surely point to the story of how Sheng Long finally ended up in the popular Street Fighter brawler series after a series of rumors and jokes. It started innocently enough with a mistake in the translation of 1991's Street Fighter II. The American version misinterpreted the original Japanese utterance of one of the characters (specifically Ryu). As a result, the game implied the existence of the mysterious Sheng Long – from "If you cannot survive the attack of the Rising Dragon Fist, you cannot win!" became "You must defeat Sheng Long to stand a chance with me."

In 1992, the EGM mag picked trace, and included a certain joke in its April issue (without revealing too much, of course). This prank ultimately turned out to be a short article in which the authors "discovered" the mystery of Sheng Long. According to them, he was a hidden opponent (and a helluva tough one at that) in Street Fighter II. A number of specific, complicated steps had to be taken to fight him. The false information quickly spread around the world and intrigued gamers. It was not until December of the same year that those responsible for the "joke" officially admitted that it was false. 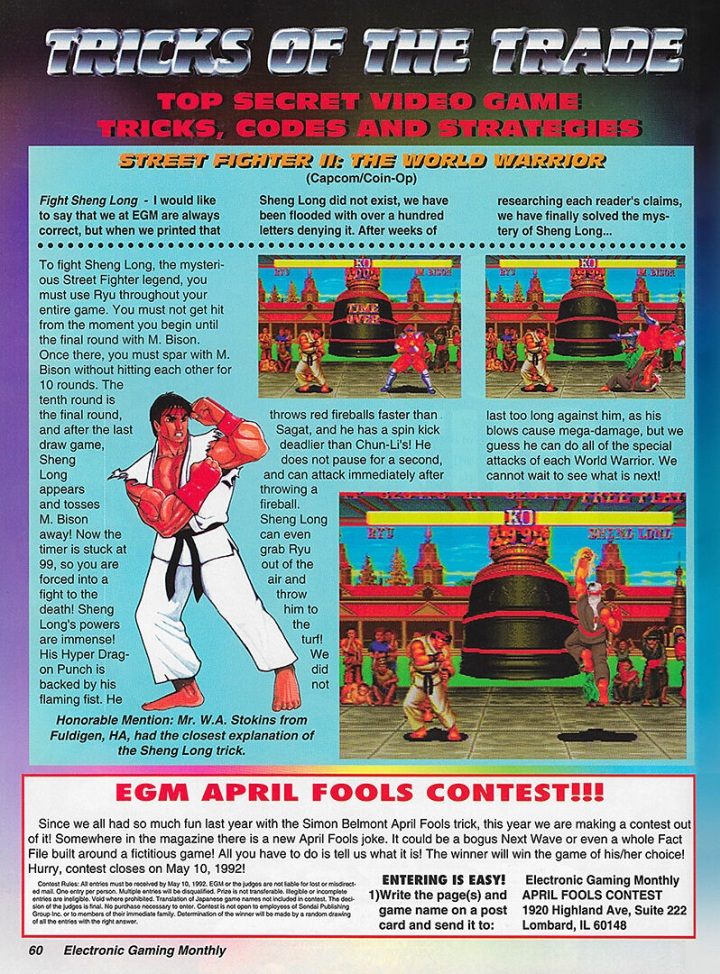 By then, however, it was too late. The story of Sheng Long won the hearts of gamers and began to live its own life, becoming an urban legend repeated in arcades. The character even appeared in the comic book, and many identified him with Ryu and Ken's trainer, Gouken. Which actually is the result of yet another mistranslation, this time of the instructions for some console editions of Street Fighter II.

EGM editors decided to use their joke again, this time in 1997, when the next installment of Street Fighter was in development. In one issue, they served readers a rumor that the third installment of the series would feature none other than Sheng Long himself. Its full specs, appearance and history were properly presented. Unfortunately, fans of that character were let down once again. The whole thing turned out to be an April Fool's joke made by the editors of EGM magazine. They even wrote the text in such a way that the first letters of the sentences formed a clear slogan – April Fools (see below). 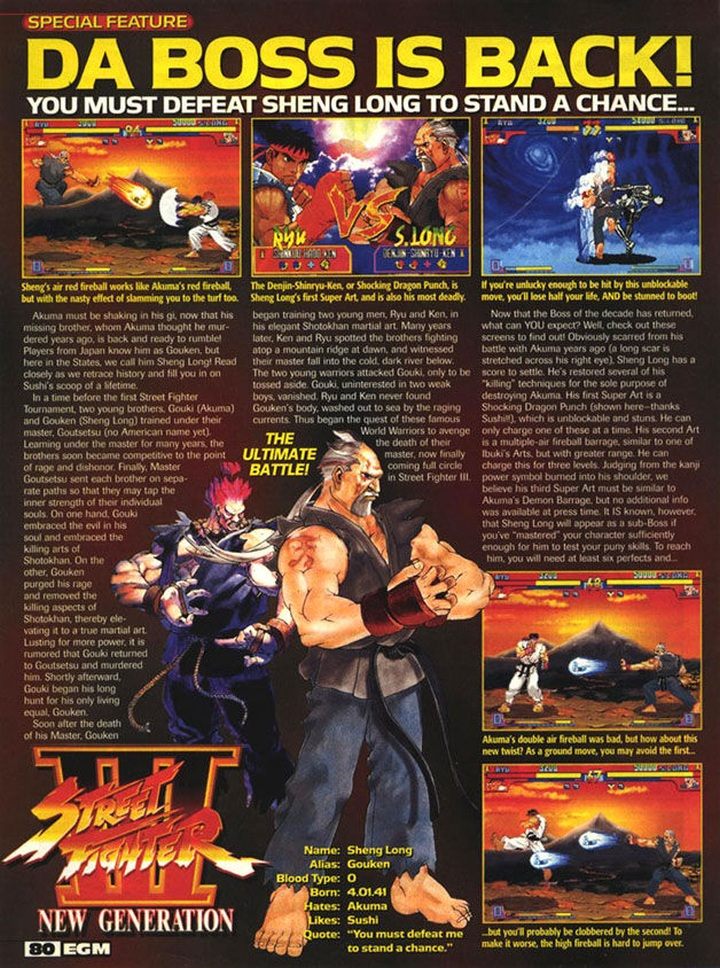 And while writing that Sheng Long eventually ended up in one of the subsequent installments of Street Fighter would have made it much easier for me to close this character's story efficiently, the finale turns out to be a bit more complicated than that. You have to know that players could still hear about Sheng Long, among other things, during the official announcement of Street Fighter IV (made available on the first of April) – then, the creators themselves were joking about his existence.

Most importantly, however, the fourth installment ofStreet Fighterfeatured the aforementioned Ryu and Ken's master, Gouken, as a fully playable character who looked just like Sheng Long portrayed by EGM in 1997. This was enough for most players to believe that seventeen years after the mistranslation, the legend of Sheng Long had come to fruition. It's worth mentioning that Capcom planned to make Sheng Long (not Gouken) a playable fighter back in 1995, in the not-so-successful Street Fighter: The Movie. 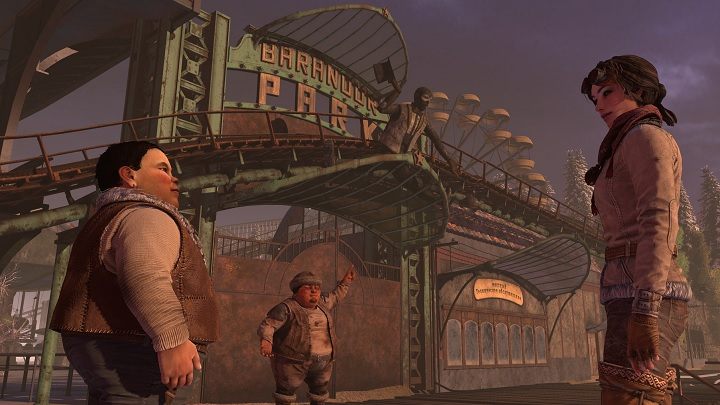 Finally, a slightly less complicated story that wasn't even a joke as such, yet that's exactly how it was received by players. On April 1, 2009, Microids announced the third installment of the acclaimed, classic point-and-click adventure game, Syberia. The announcement came without any specifics or even a screenshot, so it's not surprising that fans took it with a grain of salt from the get-go – especially after the creator of the predecessors had insisted that the continuation would not be created without adequate financial support.

Moments after the April Fools' Day announcement, Microids boss Emmanuel Olivier confirmed this dubious information – the announcement of Syberia 3 was real. The game wasn't realized until eight years later, in 2017, to a rather lukewarm reception. However, it was enough for the series to get another sequel – The World Before. We don't know much about it so far.

Speaking of jokes and pranks in the video game industry that ultimately turned out to be true, one can't help but think of the classic cow level in Diablo II. Although it's not related to April Fool's, the whole thing is worth paying a little attention to. First rumors about the location, where we had to fight cow warriors, appeared in the original Diablo. Although they were untrue, many players actually started looking for a way to get to that level. The phenomenon was common enough that Blizzard noticed it and began referencing it in subsequent games, such as with the secret cheat code "There Is No Cow Level" in StarCraft. The secret cow location didn't appear until Diablo II, but to this day it's officially said that it doesn't exist at all.