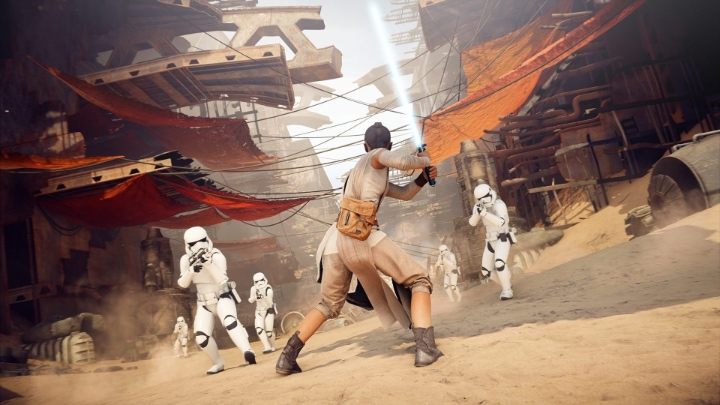 The proven formula of Battlefield set in the cult universe of Star Wars won the sympathy of players back in 2004, when the Pandemic studio was responsible for the franchise. The sequel to the version already in-development by DICE and Electronic Arts was to fix all the imperfections of the predecessor, and therefore, above all, to offer a single-player story campaign and remove the season pass, offering new maps only to people who decide to pay an additional fee. There were also some other novelties, including starfighter battles in space.

Lots of things! Suffice it to say that the premiere of the game sparked discussions in parliaments of various countries, because the media began to notice the problem of aggressive microtransactions in games intended mainly for younger players. Electronic Arts, wanting to somehow make up for the losses related to lack of season pass and the need to release new content for free, added a controversial system of cards with heroes and gear upgrades. Hours upon hours of grind to develop your character could be easily accelerated by buying additional packs of cards, which, in a multiplayer game, amounted to bare "pay-to-win" mechanics – unacceptable in the eyes of players.

In addition, the game launched with quite meagre content, and the story campaign was disappointing in every aspect; even more than the Disney trilogy, according to some players. All the advantages of the game have been buried deeply under micropayments and ubiquitous grind straight from free-to-play, mobile games. The wave of criticism was so great that the developers finally withdrew from the controversial practices and started repairing the balance of the game without coercing players to pay for character development. After a long time, Battlefront 2 went straight and is quite a good production today, but there's no point hoping for the third part for the time being.