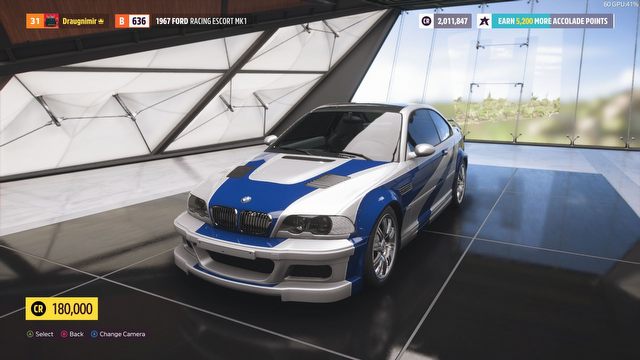 Finally, a nod towards those of you, who still fondly remember the all-time classic, Need for Speed: Most Wanted from 2005, often calling it the best car game ever. A single look at the screen above ought to make you feel nostalgic. That's right, it's the same iconic BMW M3 GT-R that starred in that game  albeit it doesn't look identical (Forza doesn't offer as rich visual tuning as NFS MW did).

In fact, the cult surrounding this model is kind of contradictory when you realize that the GT-R is not derived from a street car, but from racetracks. It is a homologated variant of the model of the same name with which BMW wanted to enter the American Le Mans Series. "As many as" ten homologated units were to be manufactured, and it only got to six  three of which were just prototypes. If you needed proof that the beemer from Most Wanted's cover is unique, you won't find anything better.

Fortunately, this time you don't have to win your way through a campaign-worth of illegal racers to (re)claim this ride. It's enough to go to the salon and spend 180 grand. credits.

Alternatives for fans of (visual) tuning and Need for Speed lovers:

Of course, the eight vehicles above  together with alternatives  not only don't exhaust the topic of interesting machines available in FH5 ; we've barely scratched the surface. After all, we did not mention cult muscle cars, classic sports cars (with the Jaguar E-Type at the fore), powerful limousines, hot hatches, drift cars, nor pure off-roaders  and each of these categories also has a strong representation in the game. Who knows, maybe there will still be an opportunity to write about them?