Game jam is a type of time-limited event during which participants create games based on a given theme or genre. Participants are groups of friends, randomly selected teams or individuals, and the result of their hectic, caffeinated, sleepless work is a short game or a playable prototype.

A game jam can last from a few hours to a few days, but the most popular formats assume between 24 and 72 hours to complete a project. Some are like conventions and serve as an opportunity to create games together, others take place online, with developers connecting with each other through the network. Sometimes, the entire team converges in some basement and they work from there.

Most game jams are at the same time competitions where you can win pretty hefty prizes and gain real recognition. But for a large part of developers, students and game enthusiasts, the mainstay is meeting new people, racing against time and being motivated to turn an idea into a working prototype, which can turn out a seed of a really good game.

Game jams that provide the environment and platform for all the games and ideas that are so out there they couldn't be realized in any other way. Here, people don't waste time on debating the commercial potential, the target audience, or the risks – they simply go about it. Of course, such formula brings revolutionary and barmy projects in equal amounts. Some of these games end their lives with the end of the game jam, others are developed further, but only a few have that special ingredient that brings them to the limelight and introduces to the mainstream.

In this article, we present you these games – games that started out as mere ideas, born over stacks of pizza boxes and the fifth coffee from the vending machine: bold, cool, avant-garde, or simply ludicrous, they eventually turned into full-fledged, commercially successful titles. 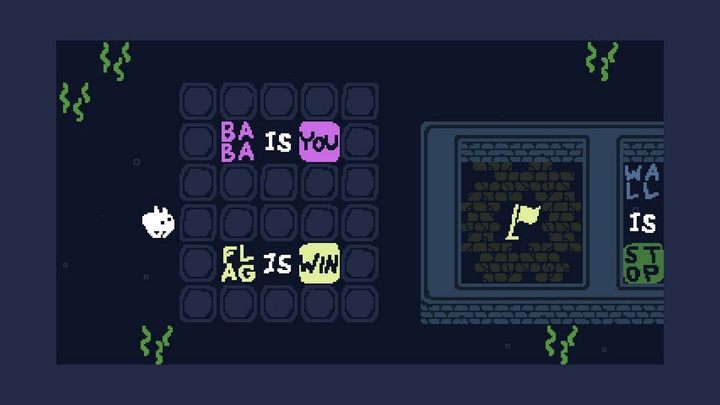 It's 2017. Copenhagen hosts the annual Nordic Game Jam. This year, the theme is "Not there." Finnish indie developer Arvi Teikari comes up with the idea of a puzzle game in which the rules of the world change when the assumptions are changed. The twist is that the rules within each level are its physical elements. The player must move them around the board, changing the rules of play in such a way as to pass a level. The boards themselves have been maintained in the style of retro games such as Dyna Blaster and Sokoban.

The prototype won that game jam, but Teikari abandoned the idea for fear of not being able to pull it off and find enough buyers. It was only the positive response that Baba is You elicited after the game jam that led him to decide to develop his work into a full-fledged game.

It took him two years, during which he presented the project on itch.io, won an award at The Independent Game Festival, and fought a legal battle with a French publisher who leaked a fake of his game online. Fortunately, justice was delivered, and Arvi was able to complete his project. He admits that he spent an "unhealthy amount of time" with the Finnish developer while working at Nolla Games and writing his master's thesis, and that working on Baba is You was "a form of relaxation" for him.

The game received many awards and won acclaim from gamers and critics alike, and Arvi was finally able to complete his master's in peace. This doesn't mean, however, that he abandoned his work – you can check out his blog to see some of the streams he made while improving Baba is You. According to SteamSpy, Baba is You has reached over 400,000 players.