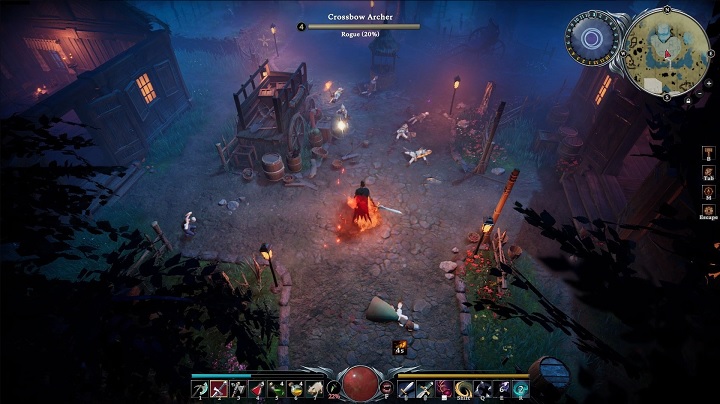 What is V Rising?

Looking at the first random screen from V Rising, one can get the impression that it's just another network hack'n'slash. However, the truth turns out to be somewhat different. Although the game uses the isometric perspective, lots of combat and skills, the game is more like an action RPG about vampires. So, the opponents themselves aren't the only threat – we also need to mind the light. During the day, we must look for shade.

In addition to combat and character development, expanding the base is also an important element of the gameplay. Its center is powered with blood. If we run out of it, the castle will slowly dilapidate. In addition to typical crafting tables, we can build be a crypt in our house with helpers who will defend the habitat in case of danger. Minions can also be sent on missions. Expanding the base is not only adding functionality to the base. The structures also look fabulous.

Apart from the obvious matters, i.e. the fact that it's always more fun to play with someone else than solo (which is possible here), it's possible to avoid a situation in which one of the players will have a much higher level (there is no typical leveling here, the level is determined by the gear we have). That's all because in V Rising, we can create our own servers, only available when the host is online. In addition, since each character is immediately assigned to a given server, and thus cannot be played elsewhere, there's no problem with uneven progress. Another issue is that when playing in a duo or a larger team, it's possible to create a team that where each member complements others. To make this possible, it's worth discussing the direction of development of each team member at the very beginning.