Are you planning to implement the DLSS?

Martial: We are going to embrace all these new technologies. For VR, we decided first to use some rendering technology that everybody could benefit from. We needed some ray-tracing, so we have something that’s really close to ray-tracing but it isn’t exactly a ray-tracing. The advantage of this, though, is that everyone can benefit from that. Later on, we will bring some layers of improvement and rendering is one of them. We want to have equal quality across the board, so we’re going to improve the world, improve the planes, the ATC, all the different layers.

Jörg: We did some studying. Flight Sim X, the predecessors too, but especially Flight Sim X – a great piece of software, but by the time it came out, it wasn’t the best frame rate ever. For a lot of people it ran at 15 fps, so we didn’t want to do it. We wanted to make sure that everybody who wants to play the sim and has a reasonably powerful computer can do it. Like a true PC game, there are all kinds of sliders and you can choose what you want. Cloud quality versus ground quality versus all other knobs you that can pull, including resolution of course.

I think it’s super important that it runs well, hits at least 30 FPS or more, and that you can basically customize, instead of forcing everything to high-end, and then people who don’t have the money to buy a new rig can’t really experience it. I think it’s the wide approach. 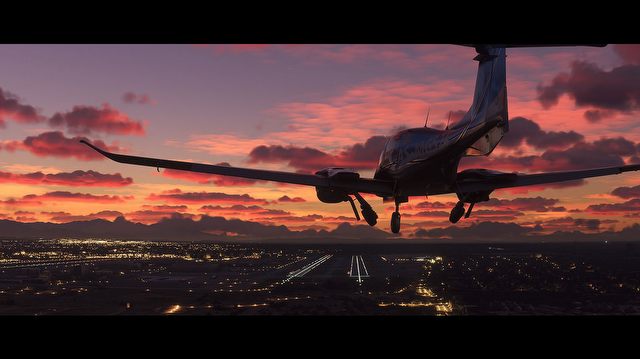 We have time for just one question, can you say anything about the Xbox version?

My point is: I have to use like 6 USB ports on PC just to set up my controls for flying. I don’t see that passing with a console version, it has to be different from the PC in some ways…

Martial: We are trying to take advantage of every single platform that we’re using. Jörg was talking about scalability so everyone can benefit from the simulator whatever the computer is and we have the same philosophy for inputs. Whatever inputs you have, you should get a super experience. It can be just a pad or a homemade cockpit. We are embracing sticks, VR, TrackIR – everything what people are using with a large scalability of inputs. We are trying to make it doable with whatever hardware is out there.

Jörg: There is a famous movie quote from the film Field of Dreams: “Build it and they will come.” I think there haven’t been any flight sims controllers for consoles because there weren’t any flight sims on consoles. So sometimes you need to build something. And the peripheral manufacturers are super excited that we are going over to consoles because we’re gonna reach completely different people – people that have never experienced flight sims, probably because they don’t have a big PC or aren’t PC gamers.

But Xbox supports most keyboards. And we don’t really have anything to announce today, but clearly people are working on a device that will make a real sim experience on consoles.

And what about the 3rd party planes and mods which often cost more than the game itself? Are you planning to make these available on the Xbox store too?

Jörg: Yes. There is a community of simmers and community of 3rd party creators. To the simmers, we talked right away. And to 3rd party after last year E3. We called them and said: “Hey, we are building a new platform, please help us.” Many of them immediately jumped in and helped with the development of SDK. One thing they wanted from us was to build an in-game marketplace. Without it, they would have to build a website and drag people there, so they asked us to build something into the sim for everyone.

And the offer will be scalable. Everything will find its audience. I am not concerned at all about pricing. What’s nice is that there will be a full spectrum. There are gonna be planes which cost 10 bucks, too. It’s just up and down a scale and people will find what they are looking for.

Great! Thank you very much for the interview!