Assassin's Creed wants us to harass the poor

In the first Assassin's Creed, we learned the cardinal rules governing the guild of assassins: blend in, do not harm the innocent, and serve the truth and freedom. It was hard not to get the impression that, although the order dealt with assassinations, it mainly acted on behalf of the weak and oppressed, punishing those who abused their position to torment the less fortunate members of society. Altair, the protagonist, after being relegated to the degree of novice, should know perfectly well that he's expected to be compassionate and merciful towards those, whom he vowed to protect. But if you want to pass all the achievements in the game, you will have to stop thinking about that... and start being an asshole. 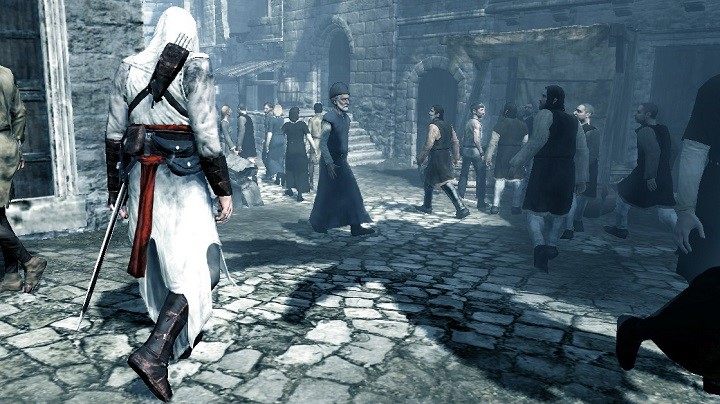 Ordinary people should be our allies in Assassin's Creed  but for one achievement, we have to push a bunch of them away.

The trophy "Enemy of the Poor" forces us to harass the beggars. From time to time, a beggar runs up to Altair, asking for money  after all, in his attire, the protagonist looks rather well off. The natural impulse would have been to toss a few coins or ignore him until he goes away. However, if we are to achieve this, we must catch the beggar by the coat and throw him to the ground. And then repeat that 24 times. You can try doing that with a single guy, but you'll kill him before you get the trophy. If you're already harassing beggars, you probably won't have much of an issue with collateral damage.