I won't be too revealing when I write that games allow us to do a whole bunch of things that we certainly wouldn't be able to do in the real world. For example, building a city like this. Few of us actually get a chance to really build a house, lest themselves  for most of us, construction sites are mostly minor inconveniences on the way to work; noisy punctuation of city.

That's why most of us can only realize our building fantasies in video games, creating houses, space stations, factories, colonies, recreational facilities, full-fledged cities, or even countries. Fortunately, among the developers, there's no shortage of studios specializing in games that allow similar fun. Over the years, a whole host of diverse building sims have entered the market. The list below contains what we think are the best in the genre.

SURVIVING MARS IN A NUTSHELL 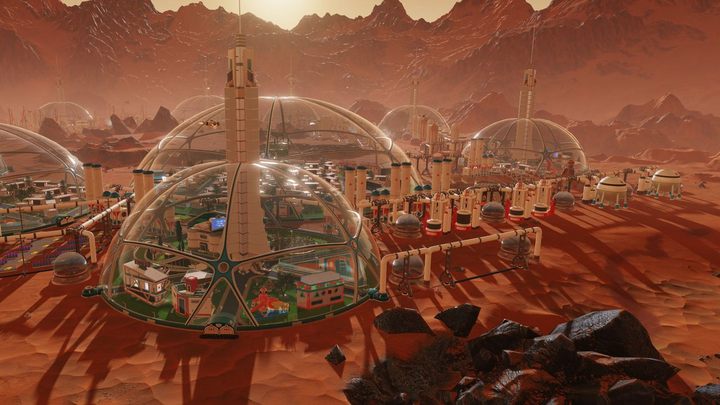 Surviving Mars is a great example of playing with convention and offering players interesting challenges, and on top of that  thanks to Elon Musk's ambitious plans, as well as the recent landing of the Perseverance rover on Mars  the game is extremely relevant. Colonization of the Red Planet is a sexy topic, and the work of the Haemimont Games team (the creators are also behind several installments of the well-known Tropico series )gives you achance to see what it could look like. Hint: it won't be easy.

While playing, we have to account for the supply of water, oxygen, and also make sure that we have a the necessary raw materials (e.g. metals, polymers, concrete) and electricity. As time goes by, the game gets easier and a bit too predictable, but for the first few hours Surviving Mars is a true thrill  and a challenging one at that.

The fact that the game was offered for free on the Epic Games Store at one point can be considered an added value. There's a good chance you already have it in your library, and a trip to the Red Planet is just a few clicks away. 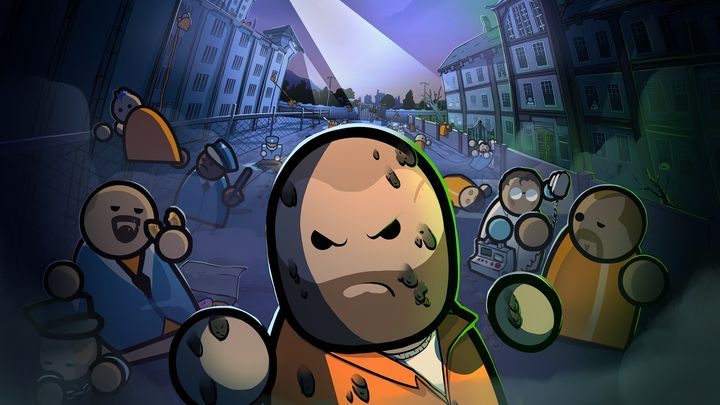 PRISON ARCHITECT IN A NUTSHELL

Game number nine is a decidedly more down-to-earth one  literally and figuratively. Prison Architect, the work of English independent developer Introversion Software, is a game, in which we're tasked with building a prison and then managing it in the most efficient way possible.

Mechanically, the game is a combination of economic strategy and RTS. It is the player's responsibility to both plan the facility itself and take care of the needs of its inhabitants. We need to provide them with food, some exercise, sanitation, and a reasonable level of security.

It is worth noting that prisoners are different from one another  they have their own characters, strengths and weaknesses, may be better or worse suited to certain tasks and require specific approaches. Neglect can increase the unrest and risk of violence and, in extreme cases, even lead to rebellion that will render your efforts futile.

I would also like to add that Prison Architect is available with an Xbox Game Pass subscription  so if you happen to be paying for it, there's no reason not to check Introversion Software's game out. 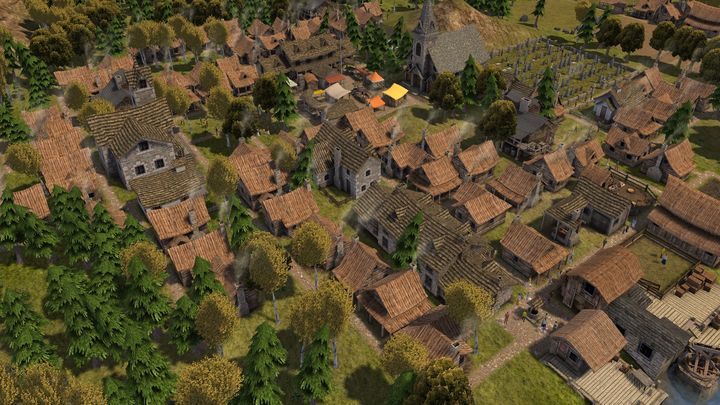 BANISHED IN A NUTSHELL

Today  in the age of globalization, internet, remote work and digital nomads  it may seem a tad strange, but in the Middle Ages, exile was one of the most horrible punishments one could get. And it is by no means just about emotional issues such as longing or separation from family. No, I'm talking about real threats arising from absolutely mundane things  like hunger or lack of shelter. The woes of a man sentenced to decapitation were essentially over very quickly  a split-second, and all the problems were no more. Exile in practice often meant death, but it was a much worse and more painful death.

In Banished, the game by an indie developer, Lukas Hodorowicz (head of Shining Rock Software), we experience the fate of a group of exiles in a visceral and realistic way. The player must take care of a group of outcasts who have almost nothing and need practically everything. We need clothes, food, shelter, firewood, and our every decision consequences and causes some kind of reaction in the world  for example, cutting down too many trees will limit our access to game, and excessive fishing will make all the fish disappear  just like irl.

Banished is not a simple game  almost every choice can end tragically for someone and we certainly will not avoid casualties. However, once we make it through the first, harsh, cold winter, there's an incredible sense of satisfaction.

FROSTPUNK IN A NUTSHELL 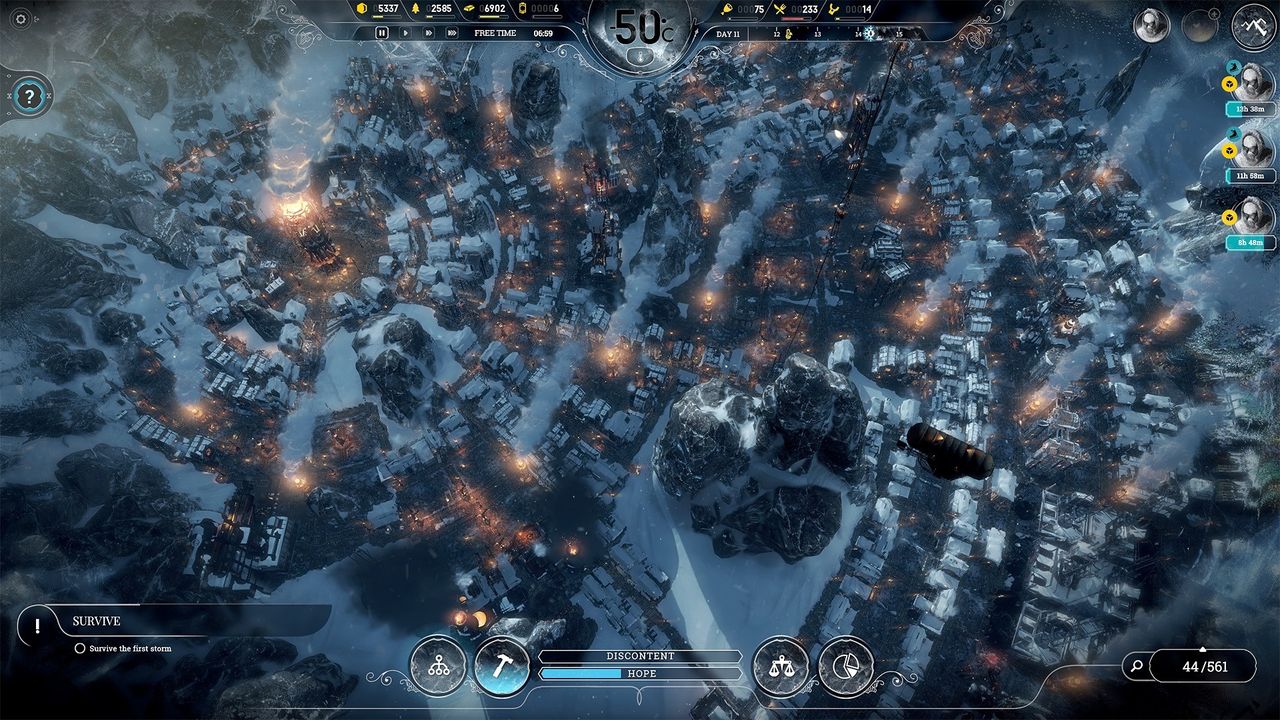 We already said "cold winter," so it is impossible not to mention the production in which extremely low temperatures are our main enemy  just like in Texas. We are, of course, talking about a well-known title developed by 11 bit, namely Frostpunk. The game takes us to an alternate version of the 19th century, when an ice age hit the planet. Only a handful of people survived, trying to build a community and a thriving town around a steam heat generator.

At the heart of this game lies a classic city builder, in which we build both shelters for residents and various industrial buildings and buildings for public use, such as hospitals or kitchens. All the while, we also have to manage our gradually growing community; not an easy task since virtually everything is running short in the frozen parts.

And this is where perhaps the most interesting element of Frostpunk appears, namely the difficult decisions we are forced to make. We not only build the city, but also rung it. We make the toughest decisions. Make our children labour for us, or increase the amount of work? Deny refugees entry into the city, knowing that we may not be able to feed their entire community, at the same time giving up potential workforce? There is no shortage of similar situations in Frostpunk, and many of the repercussions can remain dormant for quite a while.

The easiest way to check out 11 bit studios' game is to subscribe to Xbox Game Pass  Frostpunk is still available for the PC there.