Highway to the Danger Zone

A bit of slack and entertainment in the serious world of realistic and complex sims was introduced primarily by the Swedish Heatblur studio. The F-14 Tomcat simulator was not, after all, so long-awaited and exciting production only because of the beauty of the aircraft, or its role as the "defender of the fleet." It was always about the cult film Top Gun featuring Tom Cruise. The community waiting for the premiere of this module was generating dozens of memes and references of the movie, remembered the quotes and the punchy soundtrack.

Top Gun's frenzy became even more intense with the release of Tomcat on the DCS World platform. It took just a few hours for the players to create mods that faithfully reproduced the coating of planes and helmets of the main characters  Maverick, Goose, Ice Man and Slider. The iconic scene of flying "on the back" above the F-5 Tiger II (MiG-28 in the movie, unfortunately, without showing the "finger") was recreated a hundred times over, as evidenced by numerous screens and videos. The crash landing mission from the beginning of the movie was also recreated  with the dialogues straight from the film. Not to mention the atmospheric opening scene from Top Gun. 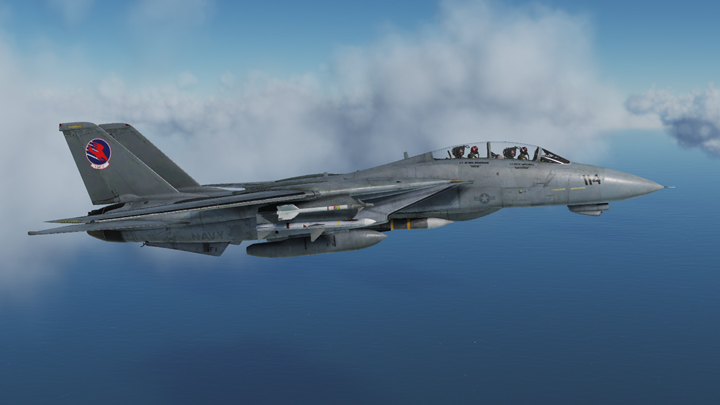 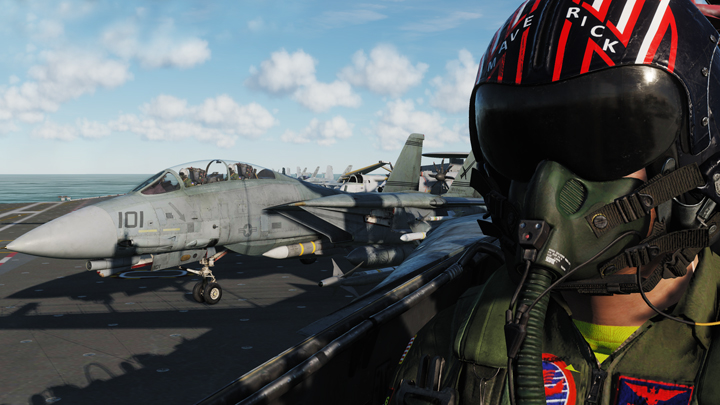 The Maverick helmet and its aircraft were created immediately after the launch of Tomcat.

The most interesting thing is that the cult passion for the F-14 Tomcat was also shared by the creators of the simulator from the Heatblur studio. They included quite a few, excellent easter eggs referencing the film, effectively and inventively bypassing the (likely very expensive) licenses for official elements of the film. Looking at the creativity of the authors, this limitation is not apparent at all  and it is not only thanks to the creations of the players, who, for example, quickly replaced the 80s-inspired original soundtrack with the soundtrack of Top Gun.

There are other subtle little things such as the name of the AI (which takes control of one of the two seats in the cabin): Jester and Ice Man, i.e. the names of the characters performed by Michael Ironside and Val Kilmer. Before taking off, the pilot in the aircraft carrier salutes just like Tom Cruise did before the final battle. This is a custom among US Navy pilots, but in another simulator of a Navy fighter jet, the F/A-18C from Eagle Dynamics, you won't find this detail. After a landing, our navigator often comments on the style of landing on an aircraft carrier, and in one of the remarks, states that "Meg Ryan would probably like it"  the actress played an episodic role of the wife of Goose  Maverick's navigator. 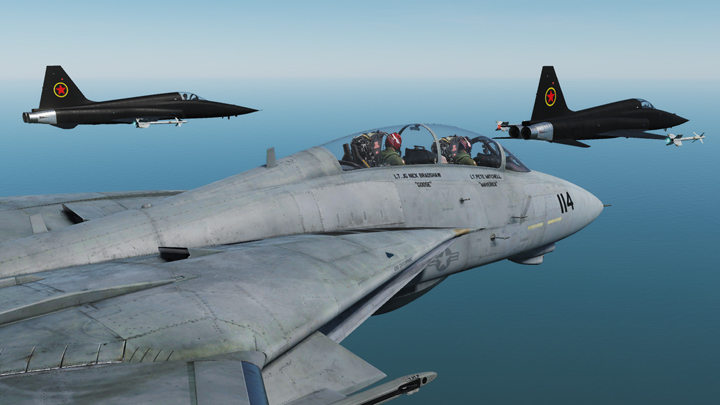 Maverick and Goose vs. MiG-28.

The most interesting and surprising easter egg is found during air battles. In Top Gun, the enemies flew fictional MiGs-28, which, out of necessity, were replaced with American, Vietnam War-era, F-5s Tiger II. In Heatblur's incredibly realistic F-14 Tomcat simulator, also features these invented fighters. Our virtual navigator, like the real one, can voice-identify targets when they are close enough. If the enemy aircraft will be exactly the F-5, straight from the movie, with the characteristic, black coating with a red star on the tail, Jester will yiell into headphones: "It's a MiG-28!" If the hostile machine is using the painting of any other, real or fictitious division, he will always say that it is an F-5. Ingenious and brilliant. Top Gun lived to see twelve games under the official license, but the best adaptations were always the games without the rights to the franchise.