What a year it was for fans of flight simulators! Maybe it's too early to speak of a real Renaissance of the genre that would elevate it back the level of popularity from the 90s, but at the same time, it's quite obvious that 2019 has been its best year since a long, long time. First, in spring, the long-awaited F-14 Tomcat appeared on the DCS World platform, finally enabling us to feel like Maverick from the cult-classic Top Gun. Then, in early fall, we got a sim of perhaps the most recognizable jet fighter of them all, the F-16C Viper, which not only reminded everyone of another, slightly kitschy movie from the 80s  Iron Eagle  but also stands a chance of attracting new players from around the world, thanks to the iconic status of the F-16 among many aviation aficionados. The world of flight sims, however, goes beyond DCS.

Meanwhile, another dev team in the East was hard at work  the creators of IL-2 Sturmovik series. An early version of Battle of Bodenplatte was released, in which you can participate in airborne clashes between the Allies and the Luftwaffe over Europe in 1945. The second production is the spiritual heir to Rise of Flight, IL-2 Sturmovik: Flying Circus-Volume I. It allowed us to travel back to the First World War and test your skills in the first real combat aircraft, such as SPAD 13 or Fokker Dr. 1.

All these games, both the DCS World modules, as well as expansions to IL-2 Sturmovik appeared in Early Access, and it will still take a little more time before they're eventually fleshed out. Each of them, however, already offers some functionality and content, which should allow evaluating their quality and capabilities.

A huge surprise was the announcement of the return of the Flight Simulator from Microsoft. The latest installment is due as early as next year to replace its predecessor, which, although still operational, dates back 13 years! Flight Simulator also has the ability to attract many new fans of flying, as the developers promise an Xbox One version. So far, the promotional materials have been leaving people in awe with the amazing quality of the graphics, based on the real-time streams of huge quantities of data from external servers. Is this the future of air simulators? 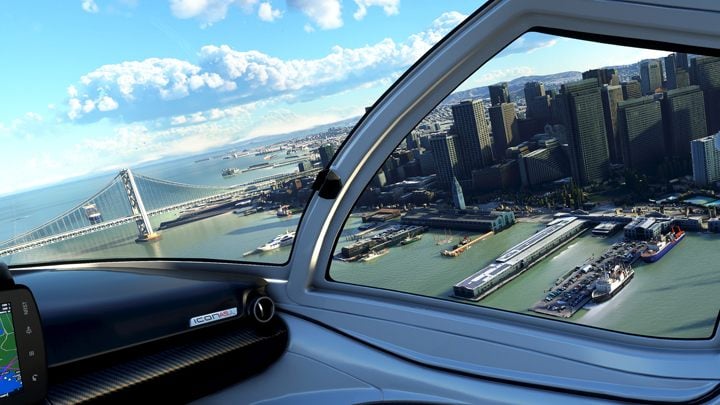 The new Flight Simulator impresses with its revolutionary graphics, taking advantage of streaming of huge amounts of data.

This year's list of sensations closes with the announcement of another great return, the reactivation of MicroProse. In the 80s and 90s, the team led by Sid Meyer and Andy Hollis dominated the simulator market with products that not only surpassed the next milestones in terms of graphics, but also perfectly combined the realism of piloting a modern combat vehicle with an attractive and affordable gameplay for everyone. It is not yet clear what will be the first move of MicroProse after they're back on the market and what game they will decide to introduce. For starters, it seems that there will be a new World War II air combat sim Warbirds, although judging by the concept art from the official website, we hope for a lot more.

THE COSTS OF FLIGHT 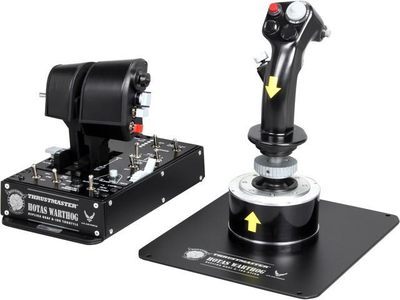 An able PC is not the only expense that is needed for enjoying next-gen virtual flying. Although, theoretically, the aircraft can be controlled using the keyboard, this option is suitable only when testing the settings, or for casual, sightseeing flights. To effectively fight in the air or perform some complex maneuvers, we will need at least a good joystick, and in the case of modern aircraft  the HOTAS (Hands On Throttle And Stick) system with a separate throttle.

If we want to start with the joystick itself, make sure it has the Hat Switch and a built-in throttle axis, these are mandatory. Thanks to the possibility of binding keys with modifiers (Shift, Alt, Ctrl), we will be able to have at hand almost all the necessary functions. This is suitable for simulator of older aircraft  Warld War II-era, and perhaps the 1950s and 60s.

Modern jet aircraft like the F/A-18 or F-16, on the other hand, require immediate access to many functions of the weapons and defense systems, and here, in addition to the joystick, it is also useful to have a separate throttle control. And the better the quality of our gear, the easier it will be to perform complex maneuvers such as flying in formation, refueling in the air, or landing on an aircraft carrier.

A good, inexpensive choice to start with, is, for example, the Thrustmaster T16000M, costing about 50 bucks. It's also available with a throttle controller for 130 dollars. The next price/quality threshold is Logitech-Saitek. The X56 set costs about $250. The best choice is still considered the Thrustmaster Warthog, priced at $450, and the specialized products of firms such as Virpil, available within the same price range.

In addition to the joystick, you should also invest in separate pedals (starting from $90). Flying in VR is becoming increasingly popular, and it provides truly amazing experiences. Its cheaper (and, at some point, mandatory) alternative is the eye-tracking system Track IR, allowing you to look around the cabin and environment without using any buttons. The original kit is priced at $170, and a homemade equivalent that uses a PS3 camera is available for about $25.

Is this all in terms of expenses? Of course not! The biggest enthusiasts build complete cockpits, to-scale  and here, sky is almost literally the limit. But bear in mind, that a decent joystick costing about as much as a normal video game is absolutely enough to full enjoy flying sims! 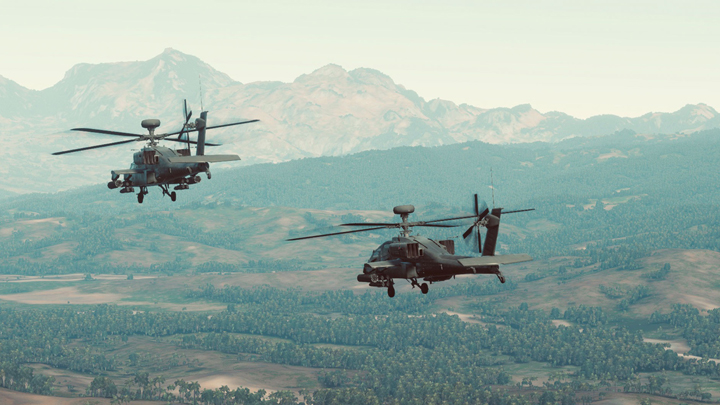 The MicroProse making a comeback.

All these events are important to the world of simulators not only for the novelties, but, above all, for the media hype they create. For the first time in many years, simulators are timidly making their way into the mainstream again. News and videos appear in popular media outlets on a par with the biggest console hits. The releases of F-14 Tomcat and F-16C Viper also showed that the fanbase of aircraft simulators is not a hermetic group of deadly serious adherents of uncompromising realism. It consists of ordinary players who love easter eggs, good entertainment, and are very much looking forward to playing true flight simulators that combine an exciting storyline, the right atmosphere, and a sense of progress with a new model of flight and combat.