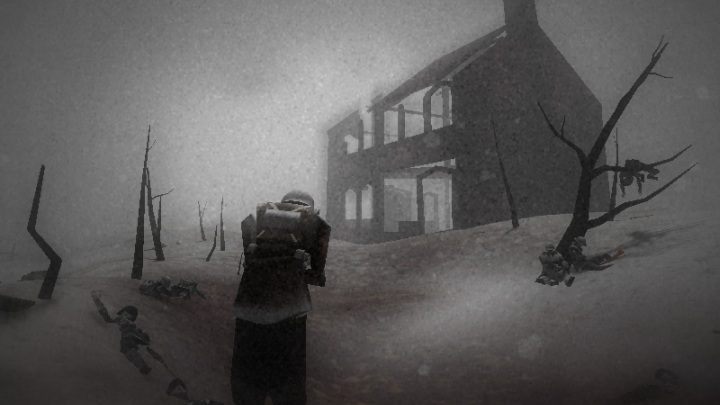 The Snowfield is an experimental game developed as part of GAMBIT Summer 2011. You may get a little dissonance at first, as it's a free, browser game, but after playing it from a few moments, you won't be able not to treat it seriously. The developers went for a simple idea: where most games end (i.e. after the battle), this game begins.

The Snowfield is different from all the games on this list  and it gains a lot from its aura of mystery. It's actually unclear whether this is a horror film or a psychological drama, as we wander the ice-chained and snow-covered wasteland in order to find other survivors and bring them to the fire. In order for them to follow us, we must first do something for them (e.g. find a cross of a soldier who's an ardent believer, in order to stop him from staring into a shrine). At the base, we have a large stove, in which we burn not only wood, but also rifles, or letters to families found on the corpses of soldiers. Does the game expose the immeasurable suffering and futility of war? Definitely. The game takes less than 45 minutes to complete, and the gameplay could use more polish, as could the animations and the controls.