GTA is primarily a TPP game. The introduction of the first-person perspective in GTA 5 felt like a bit of a stretch, if not a gimmick. However, since it was available in Red Dead Redemption 2 from the beginning, we're lead to believe that Rockstar is married to the idea, and we can expect it in the next installment of GTA as well. So it would be worthwhile to ensure that this isn't just a simple shift of the camera position, but a polished gameplay element.

Since Cyberpunk offers only FPP view, every part of the game is tuned to match it. Shooting, leaning out from behind cover or driving may not be perfect, but the game can be passed without missing anything a TPP offers. The power of FPP is most evident in the dialogs, when we observe everything from our perspective and NPCs address us directly, moving around the scene and performing different actions. 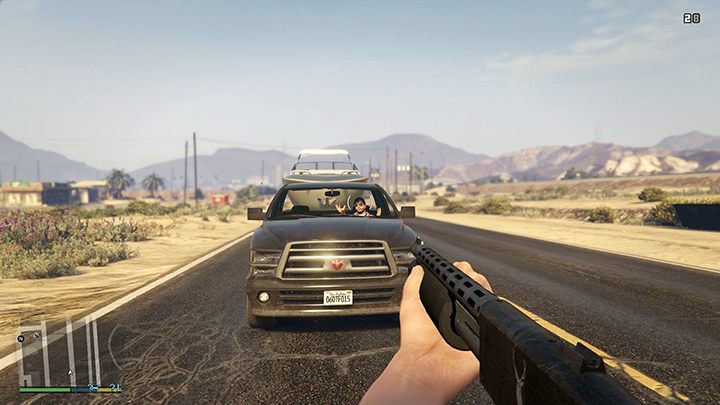 FPP mode in GTA was a simple shifting of the camera. It could use more refinement, including separate weapon models.

The FPP view in games from Rockstar has so far been more of a curiosity than a full-fledged alternative way of experiencing the game. If it was to appear again in "six", it should undergo some refinement. One could be tempted to have separate, polished weapon models and animations, or to automatically adjust the field of view in cars to a slightly wider angle. However, it's doubtful that alternative versions of cut-scenes will be prepared 0 in this respect, GTA is still likely to remain more cinematic experience than regular RPGs.

We waited for V, now its time for VI

The fifth installment of Grand Theft Auto still looks great, we still enjoy revisiting it, but it's slowly becoming just a well-preserved oldie. After all, it will be eight years this year since the original release of GTA 5. We've also been waiting eight years for V's adventures in Cyberpunk 2077 since the first announcement. So it's high time to move on from V to VI  at least with the first teaser trailer. Your move, Rockstar!