Paper Beast is an exploration adventure game, developed primarily for virtual reality sets by an independent studio called Pixel Reef. This is a company founded by Eric Chahi, a French developer who worked on the iconicAnother World and later co-created productions such as Heart of Darkness and From Dust.

Paper Beast takes players on a journey to an alternative world on a server. Over the decades, the data and algorithms that fill it up have managed to create a living ecosystem, and the titular Beast is a part of it.

In Paper Beast the action is shown from the first person perspective (FPP). Production gives plazers a wide world at their disposal, which thez can freely explore. The authors did not set any specific goals. While wandering between picturesque locations, plazers can interact with both plants and inanimate objects, as well as fancy animal-like creatures. Interestingly, the behavior of the latter is supervised by an extensive simulation system, so that they can enter into complex relationships with each other and with the player, responding vividly to the actions of the latter (some may even become friends with him).

Paper Beast is based on Unity technology. The title has colorful, but minimalistic visuals, which in terms of style can evoke some associations with the aforementioned Another World. 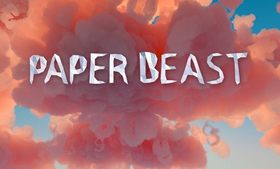