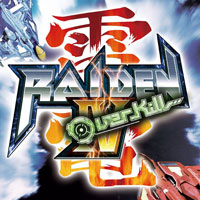 Shoot'em up, where we sit at the helm of a futuristic fighter and eliminate hordes of enemies, making use of an extensive arsenal. Originally Raiden IV made his debut on arcade machines, and later also appeared on home entertainment devices.

The third installment in the series of adventures of the eponymous friendly hero. Released for PC Windows and consoles, the game is an action platformer. Rayman and his friends, Globox and Murfy, have to face the army of Hoodlums. As you play, you explore new, colorful locations, from beautiful, magical places to ruined areas inhabited by hostile creatures. Visually, the game looks better than the second installment — the textures and animations have been improved.

The next installment of one of the most popular game series by Konami, made in the classic formula of a two-dimensional platformer with hack'and'slash elements. The game mechanics of Castlevania: Harmony of Despair doesn't differ significantly from the previous parts of the series.

Puppeteer is a platformer that takes players to a traditional puppet theater, where the action of the game takes place. Its main character is a boy transformed against his will into a puppet.

Spelunky is a puzzle game created by Derek Yu and his company Mossmouth, whose main character is a spearhead. Guided by his actions, players visit randomly generated undergrounds full of treasures, but also fancy traps and dangerous enemies. The game is about collecting valuables, discovering the secrets of individual boards and avoiding threats.