A compilation of three games from a popular series developed by CyberConnect2 that are based on a hit manga created by Masashi Kishimoto and its animated adaptation. The collection contains: Naruto: Ultimate Ninja Storm (2008), Naruto Shippuden: Ultimate Ninja Storm 2 (2010) and Naruto Shippuden: Ultimate Ninja Storm 3 Full Burst (2013). The series takes place in a world that is a combination of feudal Japan, magical fantasy and modern technologies where one of the most important roles in shaping the geopolitical situation belongs to villages that train ninja warriors who are later rented out for money. All three games in the collection have the same basics and the goal of the games is to fight with other warriors that have their own fighting style and unique special attacks. However, all titles are thoroughly remastered and thanks to that they offer a smoother animation, better anti-aliasing and a higher resolution.

An action role-playing game for mobile devices, developed by Bandai Namco. The game is based on a popular manga series of the same name, which is mostly apparent in the plot and visuals. In the single player campaign, you play as the eponymous Naruto and the story focuses on the adventures of the ninja warriors. The protagonist and his friends embark on various quests, while you can learn their stories. The core of the gameplay is unlocking new characters and combat; the battles are turn-based, and to succeed, you need to think your attacks through, use special abilities of your characters and choose the right strategy. Moreover, you gather experience as you play, and unlock more advanced battle techniques. The story campaign consists of a series of missions, which you can play either on your own or with two other players. There's also an option of PvP battles  the game features an online ranking system. Naruto Shippuden: Ultimate Ninja Blazing features 2D visuals, based on the anime adaptations of the manga. 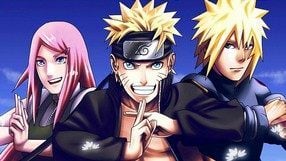 The fourth major installment in a popular fighting game series set in the famous ninja universe of Naruto. This game series has been developed since 2008 by Bandai Namco Entertainment. Storywise, the game is a direct sequel to the previous installments in the series, focusing on the latest chapters of the manga. In the story mode you explore the games world, meet the characters from the anime and manga and take part in spectacular duels focusing on unique special abilities of each hero. The other game mode is the fighting mode, in which you participate in duels on dedicated arenas. For the first time in the series, the game features QTE in some of the attacks. Moreover, lots of changes were introduced when it comes to combat mechanics and damage system. As this is the first game in the series to be released on the eight generation consoles, the visuals have seen a significant upgrade. Created with cel-shading technique, the artwork closely resembles the anime. 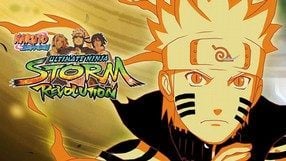 Another entry in the arcade fighting game series based on popular manga by Masashi Kishimoto. It has been developed by CyberConnect 2 studio, which has been developing the franchise since its creation. The title expands on foundations of 2013s third game in the series, focusing on dynamic battles, which  thanks to the heroes unique abilities  take place both on land and in the air. The developers prepared over 100 characters known from the Naruto Shippuden universe, including a completely new fighter created exclusively for the game by Masashi Kishimoto. New features include additional attacks and ways to combine them in more advanced techniques. As far as audiovisuals go, the title retains traditional colorful graphics stylized on original manga. 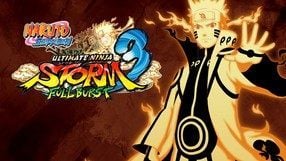 The third installment of the series of fighting games Naruto: Ultimate Ninja Storm that is based on the popular manga created by Masashi Kishimoto. The game was developed by Japanese development studio CyberConnect2 in cooperation with Namco Bandai. During the game the player can assume the roles of their favorite characters from the Naruto universe (including Naruto Uzumaki, Sasuke Uchiha, Sakura Haruno, Kabuto Yakushi) and participate in spectacular fights against rivals controlled by artificial intelligence or other players. The visuals of Ultimate Ninja Storm 3 were developed using the cel-shading technology. Thanks to that the game looks similarly to its animated archetype. Full Burst edition contains additional missions, characters and story plots. 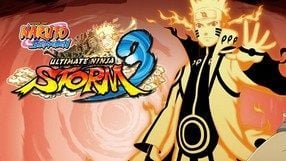 The third full-fledged installment in a series of popular fighting games developed by Cyberconnect 2 and focusing on the adventures of a bright-haired ninja warrior by the name of Naruto. Once again, the game was based on two main modes - classic 1 on 1 battles taking place on wide 3D arenas, and the story mode which allows the player to explore this popular universe freely and take part in the greatest battles depicted first in the original manga series (until the Nine-Tails invades the Hidden Leaf Village). As usual, the game includes most of the characters the fans of the series are familiar with. Each of the in-game fighters has their own unique fighting style and a set of spectacular special abilities. All of this is complemented by (what is typical for this franchise) cel-shaded graphics that successfully recreate the art style of Japanese animation. As a result, the visual impressions resemble watching another episode of one's favorite anime series. 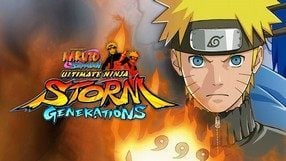 A side installment in a series of 3D fighting games developed by Cyberconnect 2 and set in the universe of the popular anime series Naruto. Similar to the previous installments, the gameplay is based on two main modes. Classic fighting is the first of them and the player assumes the roles of the most popular characters created by Masashi Kishimoto. Among dozens of fighters available, one will find here both those from the original Naruto series and characters introduced only in Naruto Shippuden. Each of the in-game ninjas has a different fighting style and a set of special abilities. The story mode is the second and the player gets acquainted with stories of the most important characters from the series here. Significantly, the player can take part in the greatest battles from the original manga series as well. Naruto Shippuden: Ultimate Ninja Storm Generations is based on the mechanics of its predecessor, but nonetheless introduces several novelties that enrich the experience.

Another installment in the Naruto: Ultimate Ninja series developed by Cyberconnect 2 and Bandai Namco, specifically for the PlayStation Portable handhelds. Based on the popular manga series by Masashi Kishimoto, the game follows the adventure of the titular ninja that gets thrown into the midst of incredible events once a great war breaks out. The plot encompasses most of the episodes belonging to the original TV series. The game offers over 20 characters the fans of the franchise are familiar with - those differ in their skills, which can be additionally developed as the player progresses. The game features several different modes, such as Story Battle (the story mode), Versus Battle (1 on 1 duel against the AI or another player) or Tag Battle, which is a cooperation-based variant (for two players). All of this is complemented by cel-shaded graphics typical for this franchise. Naruto Shippuden: Ultimate Ninja Impact introduces new camera angles to the in-game boss fights.

This title brings a continuation to the 2008's 3D fighting game based on popular manga and anime series Naruto, developed by Cyberconnect 2 and released exclusively for PlayStation Portable. Similar to the previous installments, spectacular duels filled with explosions are at the core of the experience, as each of the in-game ninjas has powerful special abilities at their disposal. The player can take part in countless battles, choosing from among over 40 characters included - the fans of the Naruto Shippuden series are definitely familiar with those, but the game features one fighter from Tekken 6 as well. Apart from the duel mode typical for this genre, the player will also find an extensive story mode that focuses on adventures of Naruto and Sasuke - one can go through the most important encounters from the original anime series in this mode. Naruto Shippuden: Ultimate Ninja Storm 2 offers 23 interactive 3D arenas that are also destructible. What is completely new here however, is an opportunity to play in co-op mode for up to 4 players.

The third full-fledged installment in a series of popular fighting games available exclusively for PlayStation Portable. Naruto Shippuden: Ultimate Ninja Heroes 3 is the first installment to be based on the events depicted in the second season of the original anime series. The story encompassed by the game goes on until the encounter with members of the Akatsuki organization, offering two separate types of stages - the classic duels labelled as Battle, and challenges belonging to the Action category, requiring the player to run away from various dangers. As usual, the game features a wide set of characters making use of various attacks and special techniques, as well as different items, such as shurikens or poisonous bombs. Fighting takes place in two layers - the foreground and the background, with the player being able to switch between them freely. What is new in this installment, is the introduction of the local multiplayer mode for up to 4 players. In the Master Road mode, the player can invite two friends in order to play the game as a team.

A 3D fighting game by Japanese studio Cyberconnect2, based on the popular manga and anime series by Masashi Kishimoto, and a sequel to the Naruto: Ultimate Ninja series for PlayStation 2 and PlayStation Portable. Like in the previous installments, the gameplay focuses on one-on-one (or rather three-on-three) battles, and you can choose from a variety of familiar characters, possessing different fighting styles and special abilities, and from a range of large arenas. Before each fight, you pick a team of three warriors: the leader that you control directly and to AI-controlled companions, which allows you to perform spectacular combo attacks. Unlike its predecessors, Ultimate Ninja Storm features slightly altered mechanics: the characters can move all over the arena, and the camera adapts to their position. Apart from the more classic battles, the game also features a story mode, which consists of over 100 missions based on the anime series.

A sequel of the PSP spin-off of the Naruto fighting game series, based on the popular manga and anime series by Masashi Kishimoto. The game was developed by Japanese studio Cyberconnect2, and it follows the adventures of the teenage ninja, who has the spirit of the Fox Demon sealed within him. Compared to its predecessor, the gameplay hasn't changed much, and you can fight either alone or in teams of three, the members of which you can choose from twenty available characters. In combat, you can use shurikens, standard and strengthened attacks, and special jutsu (techniques), which use up the chakra energy. The biggest novelty in Ultimate Ninja Heroes 2: The Phantom Fortress is the Mugenjo mode, in which you climb a hundred-story tower and complete challenges on each floor.

A side installment in the Naruto: Ultimate Ninja franchise based on popular manga series; the game was created by Cyberconnect 2, specifically for owners of the PlayStation Portable hand-helds. Despite the game belonging to the main branch of this franchise, Naruto: Ultimate Ninja Heroes features some significant differences. Among them, the largest novelty is the opportunity to fight in teams of three - this applies both to solo experience and the multiplayer mode which utilizes Wi-Fi. The game features eight interactive arenas and 20 playable fighters defined by their various abilities, special attacks and fighting styles. Completing subsequent missions, the player can develop their character's skills and unlock new ones. In doing so, one can upgrade particular types of punches, throws or parries. Doing this is also rewarded with different power-ups that are useful in action.