A puzzle game in which we fill the playing field with blocks, unlocking at the same time the background music by stars such as Moby and Paul Hartnoll.

Party Classic is the second addition to xbox karaoke Lips. This time the theme of the game is "party classics". The rules of the game have not changed - on the screen appear the lyrics of the song and stamps symbolizing sounds (their length and height). We earn points for correct song singing and e.g. for dancing to the rhythm of music together with a virtual character.

Dance! It's Your Stage

A dance game reminiscent of the Dance Dance Revolution from Konami series, so by pressing the directional buttons at the right moment we make our dancer play the choreography correctly.

A logic game by Cipher Prime that combines puzzle solving with audiovisual experiences. The gameplay in Auditorium is divided into 15 acts that consist of over 70 varied levels. In every one of those, our task is to control the stream of sounds in a way that makes it fill the containers placed in the level. This can be achieved by using special icons that change the path and speed of flight of a sound beam as well as its color if set correctly.

The next installment of the popular dance game, this time dedicated to the fun of children and parents at the greatest hits of the world-famous film studio. Players will find 25 tracks representing both the great cinema hits like the Jungle Book and popular entertainment programs from the High School Musical at the forefront.

A karaoke game that requires a Kinect sensor to work. The production was created in cooperation with MTV television station, thanks to which we play the well-known stars of the music scene and beyond. The game is mainly about singing, but also about playing simple scenes.

A music game in which we test our vocal skills, singing to the rhythm of well-known pop hits. Unlike other karaoke, Everyone Sing focuses on playing in groups of several people, supporting simultaneous operation of up to four microphones.

Rhythm Party is an arcade game created by the Konami development team, which requires from players a sense of rhythm and good physical fitness. The participants have the opportunity to create their own dance choreography for pop and dance hits, showing reflexes and good motor coordination. The game uses the capabilities of the Kinect controller.

Country Dance All Stars is the next installment of a series of arcade dance games, in which we play with the rhythms of American country music hits. The title was created for the Kinect motion controller.

Grease Dance is an arcade dance game, the title of which should be rightly associated with the popular 70' rock 'n' rolled stage musical, as well as an equally well received film adaptation with cinema star John Travolta.

A dance and sports game prepared especially for Kinecta, allowing you to play the role of a member of a cheerleading team. The game also allows other virtual players to give voice commands. 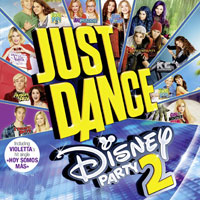