Ubisoft has shared details on the post-launch content coming to Assassins Creed Origins. This includes both the paid Season Pass as well as several free add-ons, some of them available on day one. Those latter include the Nomads Bazar, featuring a wandering merchant giving players daily quests, completing which earns them mysterious exotic rewards. The other DLC available for free on the launch day is the photo mode, letting you take and edit photos of ancient Egypt and share them with the community.

Whats also free is the so-called Trials of the Gods, a series of boss battles during special timed events. The first one of those is starting 15 days after the release of Assassins Creed Origins. And there is also the Discovery Tour mode coming early next year (read more about that here). 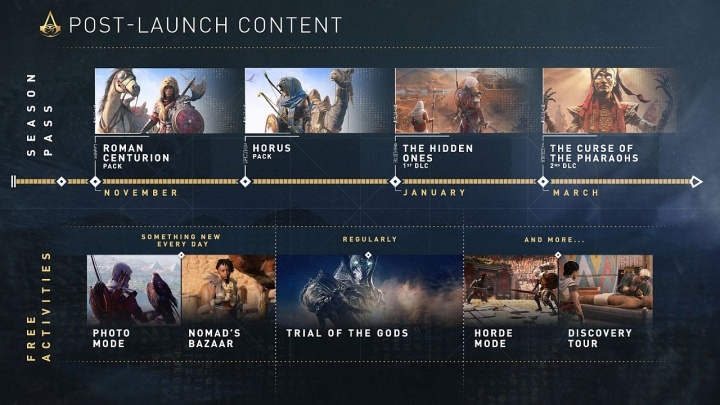 As for the paid content, this will include two packs of exclusive outfits, weapons and mounts (Roman Centurion and Horus), coming out in November, plus a package of 500 Helix Credits and the Calamity Blade available on the release day. The main treat, however, are the two major story-based DLCs included in the Season Pass. The Hidden Ones, scheduled for January 2018, will take Bayek several years into the future after the main games storyline, focusing on the growth of the newly established Assassins Brotherhood and its clash with the Romans in a new region. In The Curse of the Pharaohs, on the other hand, Bayek will battle undead pharaohs and mythical Egyptian beasts in a mystical realm. This one is coming in March. Both expansions will raise the level cap, letting the protagonist learn some new skills.

Day of Infamy free weekend and a new map incoming

Day of Infamy free weekend and a new map incoming